Agriculture in the Amazon: a sustainable success story 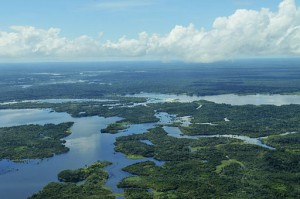 Part of the IGCSE Science, IGCSE Biology and Biology A level courses examine Ecology, Food Production, Deforestation, Soil Fertility, Soil Erosion and Pest Control. The following is an interesting story about one man’s efforts to manage these.

Leontino Balbo is one of Brazil’s largest organic-sugar growers. Since 1986, he has been working on a new form of agriculture that increases a crop’s productivity, boosts its resistance to pests, and preserves water, soil fertility, and biodiversity.

He called his approach “ecosystem revitalising agriculture” (ERA). As a result, productivity has soared from 98 to 156 tonnes per hectare.

At its core ERA has a respect for soil rather than seeing it as just a receptacle for water and nutrients. Modern agriculture damages soil through, 1) machinery compressing it (reducing its ability to hold water), 2) through fertilisers upsetting its natural chemical balance, and 3) through mono-crops reducing its biodiversity.

Traditional sugar growing involves crop burning before harvesting to remove leaves but this kills everything and releases a sugar melt, like honey, which falls into the soil. So harvesters have to cut and collect the cane and the melt, which is full of soil. This has to be washed using millions of litres of water. Balbo developed a mechanical harvester that cuts cane with its leaves still on. Another machine was designed to strip off the leaves which were then spread back on to the ground. This returns 20 tonnes of waste per hectare to the soil each year, restoring nutrients, especially nitrogen, and forming a mulch that helps inhibit weed growth.  Additionally ultra-soft tyres are used to avoid compressing the soil.

After five years of this new method an increasing biodiversity of micro and macro fauna was noticed. The Balbo fields are now home to hundreds of forest animals including foxes, deer, capybara, armadillos, four types of big cat and countless bird and insect species. Fungi started to grow in the layers of waste decomposing it. Other fungi help metabolise leguminous plants being used as rotation crops. After these came earthworms and termites, churning the soil and making it looser, and increasing its water-holding capacity. The canes grew stronger and the land developed to a state closer to that of the surrounding forest.

There are now hundreds of organisms growing together producing omeostasis, where the system regulates itself to the benefit of everything that grows in it.

Balbo still needed another way of restoring nutrients to the soil, and so the liquid residue left over, after the cane pulp is fermented for ethanol, is collected and sprayed back on to the fields. The new approach changed the geometry and the composition of the soil. Balbo soon started to see a fourfold increase in water retention, a fivefold increase in resistance to erosion and a threefold increase in organic content.

The number of pests in the fields has fallen too. Just one example is the herbivorous insect, Mahanarva fimbriolata. Soon the fly, Salpinpogaster nigra arrived which is the bug’s predator.

Balbo’s sugar is used in about 120 high-profile products from Green & Black’s chocolate to Yeo Valley yoghurt. On the farm, energy use has fallen by half and production costs are half those of conventional methods. Altogether, this is an enlightening approach to agriculture in harmony with the environment.

The History of Boxing Day
What is Philosophy?