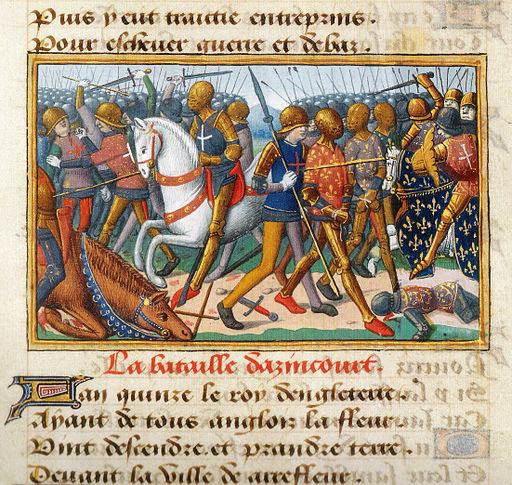 Some 600 years ago, on St Crispin’s Day, 25th October 1415, a battle was fought between an English army and the nobility of Medieval France. It would later be immortalised in Shakespeare’s Elizabethan drama, “Henry V”, itself popularised in 1944 by Lawrence Olivier’s performance in the title role.

Agincourt was one of numerous battles fought in the Hundred Years War (1337 – 1452), between the English royal house of Plantagenet and the french. The conflict was over land, sovereignty and ransomed money.

On 13th August, 1414, the English forces landed at Harfleur, besieging the port well into October. By then, winter was approaching, preceded by heavy autumn rains. But instead of returning to England, Henry decided to remain in France to capture at least some booty and ransomed money, before heading to Calais. He marched north, but, shadowed by an ever-increasing French force, was forced south. On the night of 24th October, both sides came to face each other – a decisive battle could not be avoided.

Having marched some 420km in just over two weeks, the English were debilitated through exhaustion and dysentery. The French, on the other hand, were well equipped with heavily armed horse cavalry.

The armies faced each other across a stretch of muddy ground with dense woodland on either side. This proved to set the French at a deadly disadvantage. To advance, the French had to plough through the thick mud, with their horses tightly packed and their knights weighed down by their armour. They faced over 7,000 English archers, who had their front protected by forward pointing wooden spike. Their choice of weapon, the longbow, would also prove a crucial factor in the battle. As soon as the French moved to engage, their momentum was impeded by the terrain and crowded conditions. Once the English archers opened fire, men and horses fell into the rain-soaked ground to drown or choke in the mud, their armour and shields preventing them from rising.

The battle left 1,600 English dead, compared to anything between 4,000 – 10,000 French. The French King, Charles VI, conceded Henry’s claim to the throne at the Treaty of Troyes, and the deal was cemented by Henry’s marriage to Charles’s daughter, Catherin de Valois. In the long run, the English gained little, however. Indeed, Henry died aged only 36, two months before Charles VI, and never actually took the French crown.

Opinion: E-bacc: Whose side are you on?
Advancing into darkness: Daphne Du Maurier