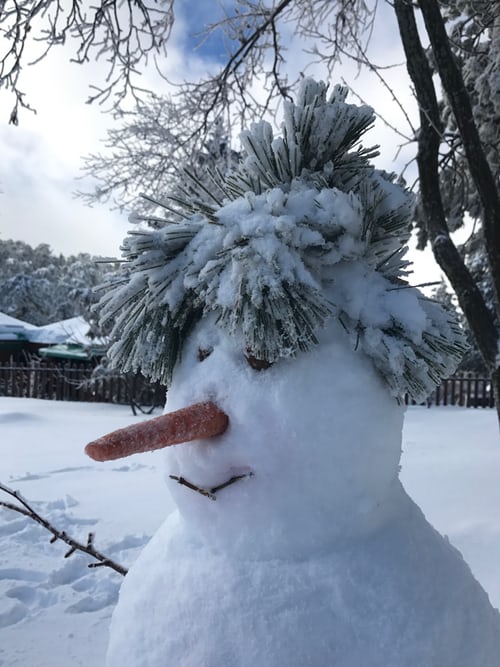 A Brief History of the Snowman

Like summer sandcastles and the colourful leaves of autumn, the snowman is a symbol of winter all over the world. It has become so synonymous with the season that, when the ground is blanketed with snow and the fun and frivolity of building our carrot-nosed friends can begin, we seldom stop to think about where exactly the tradition came from.

It is a supremely difficult question to definitively answer. By their very nature snowmen are ephemeral – melting away almost as quickly as they appear. But historian Bob Eckstein has traced their lineage back to its earliest known origins…

For this he had to venture back all the way to the 14th century. In the margins of a 1380 Book of Hours, alongside a description of Jesus’ crucifixion, there is an illustration of a snowman melting beside a fire, which today we would recognise as anti-Semitic. This first ever known representation, of a surprisingly dark tone, is a far cry from the character we know today. But don’t worry – the snowman’s story gets rather more jolly from here on out.

Eckstein aptly calls snow “free art supplies,” and while it is usually used in the humble three-sphere constructions of ordinary people, some of history’s finest artists have worked in the medium to create frozen depictions of ourselves. In 1494 none other than Michelangelo was commissioned by Piero the Unfortunate of Florence to build a giant snowman in the Medici courtyard. No record of it exists, but we can certainly imagine its magnificence. On New Year’s Eve 1856 in Brattleboro, Vermont, a young Larkin Mead – later one of America’s most celebrated sculptors – created a “Snow Angel” that was made famous around the world by an article in the New York Tribune.

Snowmen continue to crop up at important points in history like a “frozen Forrest Gump.” They have been a tool to raise morale in times of strife. During the 1511 “Winter of Death” in Brussels, Belgium, local government organised a “snowman festival” in an attempt to improve spirits in the midst of six weeks of freezing temperatures. Many enterprising citizens used the opportunity to build frozen caricatures of local officials. And in 1870, French soldiers fighting in the Franco-Prussian war constructed snow sculptures of inspiring acts of resistance.

The earliest photograph we have of a snowman is also one of the first photographs of anything. Shortly after the invention of the camera, in 1845, a Welsh woman named Mary Dillwyn was experimenting with the new technology. A snowman was among her first subjects.

Humans have a natural desire to recreate ourselves and, of course, cannot resist the urge to make our creations bigger than anyone else’s. In 1939 Dartmouth College students constructed a 38-foot, 40-ton version of the college’s founder and first president, Eleazar Wheelock. They broke the Guinness world record for the biggest snowman in 1987 with a 47.5-foot saxophone-playing behemoth, before the citizens of Bethel, Maine unveiled “Angus, King of the Mountain” in 1999. Standing 113 feet (ten stories) tall, with trees for arms and tyres for buttons, it held the crown until 2008, when the people of the town outdid themselves with “Olympia,” a 122-foot snow-woman that holds the record to this day.

Snow sculpture is one of the oldest and most universal forms of folk art, but it has taken on new forms in our modern culture. Snow people have become recognisable figures in the media starting with Frosty the Snowman in the 1950s and 60s. They have been employed as marketing tools, such as in an advert for Campbell’s Soup, and re-imagined as villainous characters, as in the Batman comics.

It’s somewhat surprising to find such a complex history behind such a seemingly innocuous and playful figure of winter fun. So if snow falls this Christmas, and you find yourself adding the finishing touches to yet another incarnation of our frozen friends, you can consider yourself part of a rich and varied tradition stretching back much longer than you might have imagined.

The Most Valuable Skills for the Future
Krampus? Who’s that?