Krampus? Who's that? I Oxford Open Learning
Home / Blog / Krampus? Who’s that? 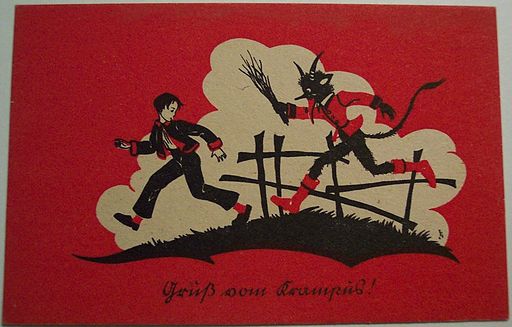 Krampus, in total contrast to the kindly figure of Father Christmas, or St Nicholas (the Patron Saint of Children), who leaves presents for well behaved children at Christmas time, is a half-goat, half-demon, who literally beats people into being nice rather than naughty.

With his horns, fangs, spiky dark hair and long reptilian tongue, the figure of Krampus symbolises the opposite of the spirit of Christmas. Often pictured carrying chains (which Catholicism believes symbolises the Devil), Krampus holds birch sticks ready to hit all those children who have behaved badly throughout the year. This ‘not sparing the rod’ originally comes from the pagan idea of Ruten – a brandished bunch of birch sticks.

In the earliest Krampus tales, the beast was said to send the children he hit straight into the underworld, or Hell. In some stories he carries a sack in which to throw small children before drowning them. Occasionally he is shown with a whip and a basket in which to hide his victims. In fact, with the roots of the Krampus figure found in pagan Europe, it was a long time before we saw his “festive” appearances. Only in the Seventeenth century was he first presented as “the opposite side of Christmas”; Only then did the comparative pairing with St Nicholas really begin.

It is to Europe, in particular Germany, that we must look for the oldest festive ties to Krampus, where the 5th December is known as Krampus Night, or Krampusnacht. Throughout this one night it is believed that the devil Krampus will search the streets, ready to punish any child who has not been good. Children will put a shoe or boot on their doorstep in the hope that, on the following day, 6th December, which brings the Feast of St Nicholas, they’ll find a gift inside – and not a birch stick.

Krampus isn’t the only demon who casts a menacing shadow over children who haven’t toed the line during the year. Other Parts of Europe have different anti-Christmas figures to worry about. These include Germany’s Knect Rupercht, a black-bearded man who carries switches with which to beat children in Germany. In France there is Pere Fouettard, who is depicted in similar vein. By comparison, though, he is seen as more of an “assistant” to Saint Nicholas, punishing those have been bad during the year whilst he hands out presents to the others.

Despite being suppressed for many years by the Catholic Church, who forbade the raucous celebrations around Krampus, his legend endured. More surprisingly perhaps, he was also banned as a figure of celebration by the fascists in World War II. They believed that he was the invention of their opponents, designed to demoralise the German population. Indeed, this Christmas time devil is staging something of a comeback.

As with all aspects of the Christmas celebration, Krampus is fast becoming a highly commercialised figure. A growing tradition in Germany, Hungary, Slovenia, and the Czech Republic involves drunken men dressing up as him and taking over the streets for a Krampuslauf — a Krampus Run. During thisrun, people are chased through the streets by “devils.” Meanwhile, in Austria, they are attempting to make Krampus more likeable by selling chocolates, figurines, and collectible horns to children. It is also increasingly popular for Krampus to appear on Christmas cards called Krampuskarten. Krampus, although lesser known in the UK, has been having a resurgence of popularity worldwide, in particular in the USA, where films and television shows about the demon receive large viewing figures.

Perhaps we should all be extra good this Christmas, just in case Krampus comes takes a step across the English Channel, wielding his birch sticks?

A Brief History of the Snowman
Creativity should mean Success