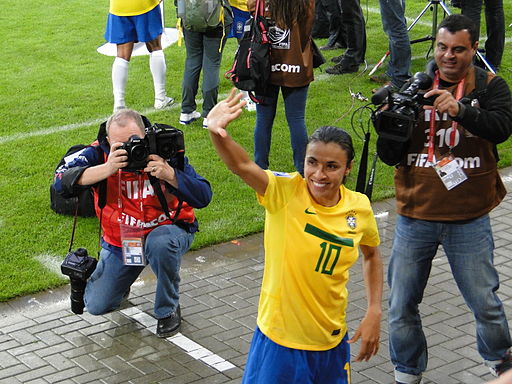 Women’s football has certainly advanced in status since kicking off the 2012 London Olympics. The latest World Cup has just opened in Edmonton, Canada, at the Commonwealth stadium. A near capacity crowd of over 50,000 saw the home side snatch a last gasp win over China on Saturday, since when each of the other twenty two teams in the tournament (making it the largest competition to date) have also played their first game. It is a far cry from the much smaller scale first championships held in China in 1991, and already the standard has been shown to be very much higher than before.

Accompanying this development is the increased level of media attention. In early tournaments it was almost impossible to find coverage of games – When the triumphant American team returned home in 1991, hardly anyone knew they had even played, let alone won. Yet just a few years later they triumphed again on home soil in front of 80,000 at Pasadena’s Rose Bowl. It took rather longer for the English media to catch on to Women’s football, but at last it is getting the attention it deserves, and each of this year’s tournament’s games is available to watch on the BBC, on one platform or another. England now have prominent showing, with coverage of all their games on BBC 2. There is far more sponsorship and funding available now, albeit a fraction of what swills around the men’s game.

As well as England, holders Japan face stiff competition to retain their title. Germany, the USA, Brazil and France are all in good contention. Traditionally strong nations include Sweden and Norway, but already new, previously weaker or absent nations such as Nigeria have come to prominence. A young Nigerian side including Liverpool’s Assistat Oshoala drew 3-3 with Sweden on Monday. Other players to look out for include England’s Eniola Aluko, USA’s Abby Wambach and Brazilian striker Marta. Historically, women’s football in South America was similarly unheard of, but Marta’s skill and popularity alone have begun to change this.

A successful contest will also help to increase the participation rate not only in women’s football, but in cycling, cricket, rugby and rowing – themselves sports which have only recently admitted women as equal partners with men.