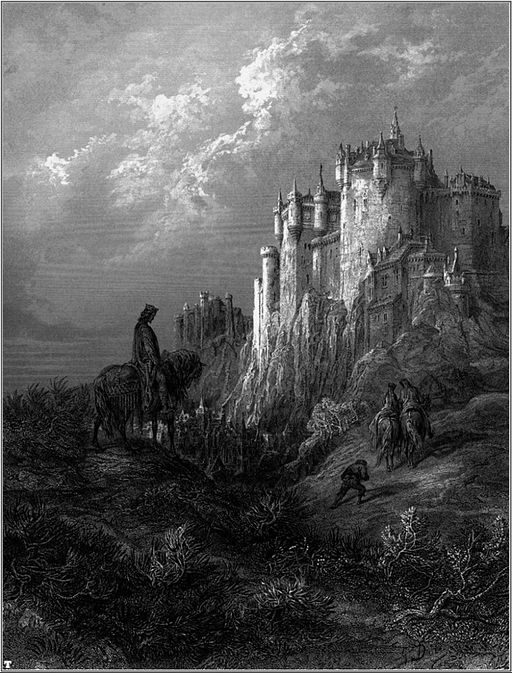 The location of Camelot has been debated by historians and literary enthusiasts for centuries.
There are three main contenders for possible venues for King Arthur and Merlin’s home of chivalry and magic, though.

The medieval chronicler Chrétien de Troyes placed Camelot in Caerleon, South Wales, on the site of a Roman legionary fort. The Welsh, who were pushed back towards the west of Britain by the Anglo-Saxons in the 5th and 6th centuries, are the direct descendants of the Romano-Britons of England and Wales. Arthur is considered by many to have been a Romano-British leader fighting the Anglo-Saxon invaders. The legend of Arthur and his knights also appears in The Mabinogion, a collection of eleven stories from early medieval Welsh manuscripts which intertwine pre-Christian Celtic mythology, folklore and history.

Referred to as Camelot by the antiquary John Leland in his Itinerary of 1542, Cadbury Castle is the site of an Iron Age hill fort near Yeovil, Somerset. Archaeological excavations show that the fort had been re-fortified, creating an extensive defensive site, larger than any other known fort of the period. Local names reinforce the links between Arthur’s Camelot and Cadbury Castle. Since the 16th century, the well on the way up the hill has been known locally as Arthur’s Well, whilst the highest part of the hill has been known as Arthur’s Palace. A causeway, known as King Arthur’s Hunting Track, links Cadbury Castle with the mysterious Glastonbury Tor.

Geoffrey of Monmouth, however, in his Historia Regum Britannae, claimed that Arthur was born at Tintagel Castle in Cornwall. In the late 1980’s Monmouth’s claim was backed up by the discovery of a 1500 year old piece of engraved slate with two Latin inscriptions which seem to link Arthur with Tintagel. The second inscription on the slate reads: “Artognou, father of a descendant of Coll, has had [this] made.” Monmouth maintained that King Coel was one of Arthur’s ancestors.

Archaeological investigations into Caerleon, Cadbury, and Tintagel all revealed pottery from the 5th and 6th centuries, suggesting that each place was inhabited during the relevant Romano-British period, but could any of them really be Camelot?

Monmouth claimed Tintagel as Arthur’s birthplace, but as the castle that stands there today was built in the early 1100s, it unlikely it was Camelot. Caerleon and Cadbury Castle are stronger contenders for the legendary site. However, it wasn’t until the sixteenth century that place names around both locations took on an Arthurian feel; which was also when the legend was enjoying a renaissance in popularity.

With other locations, such as Winchester in Hampshire, Castle of Dinerth, Colchester, Roxburgh Castle on the border of Scotland, and others also staking their claim to the home of the Once and Future King, it seems we’ll never know for sure whether Camelot existed as a real location for the brilliantly enduring tales of King Arthur and his Knight’s of the Round Table.

Opinion: When should we apply to University?
The Mabinogion