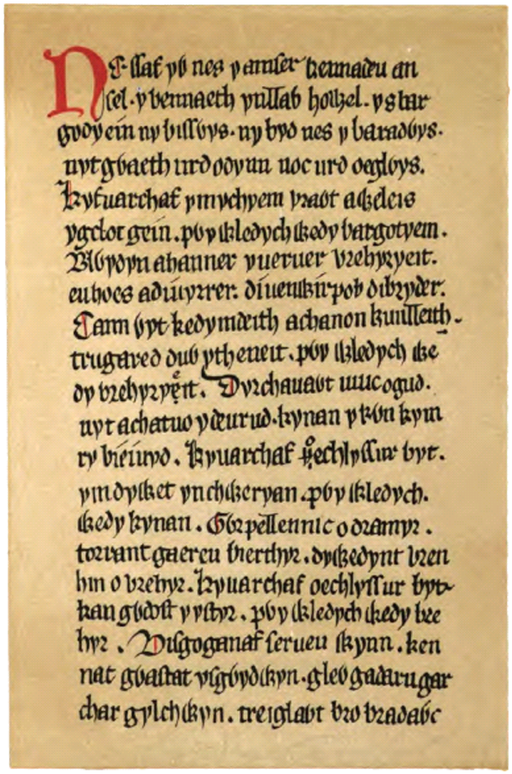 The Mabinogion is a collection of eleven medieval Welsh folk tales, which were first assembled together and published in the mid 19th century by Lady Charlotte Guest. These eleven tales, which are all concerned with the lives of various Welsh royal families and the gods of a pre-Christian mythology, are much older in origin.

It is widely acknowledged that the tales were first written down in the fourteenth century, but were based on stories that were much older. Preserved in written form in the White Book of Rhydderch (1300-1325) and the Red Book of Hergestt, some of the stories were written as early as the second half of the 11th century, and some stories are much older still.

The first four heroic tales, Pwyll, Branwen, Manawydan, and Math, make up the main body of The Mabinogion. A single character, Pryderi. links all four tales. In the first he’s born and fostered, inherits a kingdom and marries. In the second he’s scarcely mentioned, but in the third he’s imprisoned by enchantment and then released. In the fourth he falls in battle.

The Pryderi tales are set in a bizarre and magical landscape which corresponds geographically to the western coast of south and north Wales, and are full of magical white horses, giants, beautiful, intelligent women and heroic men. Five of the other ‘mabinogi’ tales involve the legend of Arthur and his knights, even including one of the earliest references to the Grail legend. Three of these Arthurian tales are even set at ‘Arthur’s Court’.

In modern productions, The Mabinogion is also used to describe the seven stories from Lady Charlotte Guest’s collection. These are The Dream of Macsen Wledig (the legend of Emperor Maximus), Luld and Llefelys, (a Welsh fairy tale), Culhwch and Olwen (the earliest known Arthurian romance in Welsh), The Dream of Rhonabwy (witty thoughts on ancient Britain’s heroic tradition), and Lady of the Fountain, Peredur, and Geraint and Enid (three further Arthurian romances.).

The word ‘Mabinogi’, is derived from the Welsh word ‘mab’, which originally meant ‘boyhood’, but gradually came to mean ‘tale of a hero’s boyhood’ and eventually just ‘a tale’.

Where was Camelot?
Do You Speak English?