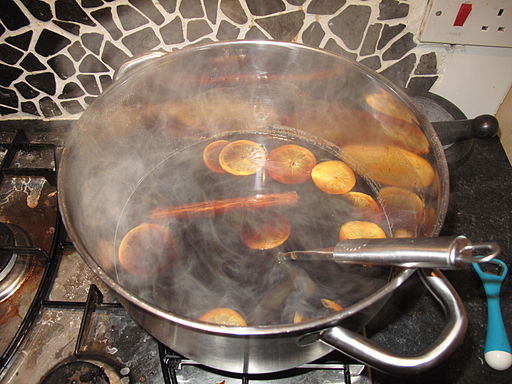 The word ‘wassail’ comes from the Anglo-Saxon phrase waes hael, which means ‘good health’. Wassailing took place on Twelfth Night (5th January) and New Year’s Eve, but many of the richer Lords celebrated the Wassail on each of the 12 days of Christmas. It was a tradition which marked the beginning of each year. The lord of the manor would greet his tenants and family with a toast of waes hael, meaning “be well.” In response, the watching crowd would cheer drink hael; “drink well.”

Originally the main focus of wassailing was the drink itself. It consisted of mulled ale, roasted apples, curdled cream, sugar, spices, honey and sometimes an egg. Mixed together, the liquid was served in one huge bowl, which was passed from one person to the next. The silver wassail bowl used at Jesus College, at Oxford University, can hold 10 gallons of drink.

From the Middle Ages onwards, wassailing slowly divided into two types of celebration. One involved groups of merrymakers going from one house to another, wassail bowl in hand, singing songs and spreading good wishes. The other form of wassailing was practiced in the countryside in fruit growing regions, where the trees were blessed.
Wassailers who sang from house to house sang songs and carols of blessing, such as…

“Love and joy come to you,
and to you your wassail to;
and God bless you and send you
a happy New Year.”

The wassailing, or blessing of the fruit trees, was most common in the cider making and apple growing regions of the UK, such as Devon, Somerset and Kent. Their celebrations involved giving tree roots a drink of cider, and soaking bread in cider or the wassail drink, before laying it on the tree branches as an offering to the pagan gods and goddesses. Like the other wassail revellers, they also sang songs while they celebrated, such as…

In the Eighteenth Century wassailing celebrations occurred on the Twelfth Night. However, the more traditional wassailers insisted in celebrating on ‘Old Twelvey’, the 17th January. This was the date of Twelfth Night before the introduction of the Gregorian calendar in 1752.

Jane Austen
How to Study a Novel