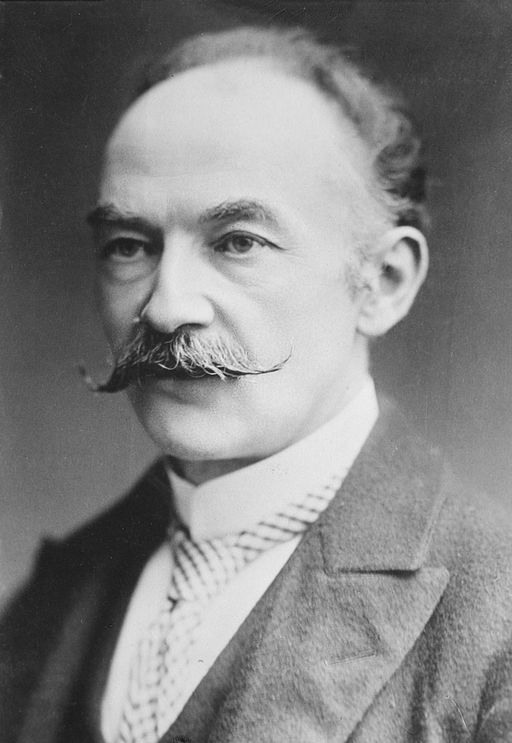 Celebrated British novelist and poet Thomas Hardy was born on June 2nd, 1840, in the village of Upper Bockhampton, Dorset.

Encouraged in his love of literature by his parents (his father was a stone mason and violinist, and his mother a fervent reader), Hardy was educated from the age of eight at Julia Martin’s school in Bockhampton. However, most of his education came from reading at home. He taught himself French, German and Latin simply by reading books.

At sixteen, Hardy was apprenticed to a local architect, John Hicks. Hardy learned about architectural drawing and the restoring of old houses and churches during the day, then in the evenings he continued his own private studies, learning with the Greek scholar Horace Moule.

Having finished his apprenticeship in 1862, Hardy was sent to London to work with the architect Arthur Blomfield. During his five years in London, he immersed himself in the cultural world of theatre and studied Classic literature. He even began to write his own poetry. Although he did not stay in London, when he moved to Dorchester to be a church restorer, Hardy took his new-found talent for writing with him.

From 1867, Hardy wrote poetry and novels. At first he published anonymously, but when people became interested in his works, he began to use his own name. His first popular novel was Under the Greenwood Tree (1872). The next novel, Far from the Madding Crowd (1874) was so popular that, with the profits, Hardy was able to give up work and marry Emma Gifford. Other popular novels followed, including, The Mayor of Casterbridge (1886), Tess of the D’Urbervilles (1891), and Jude the Obscure (1895). In addition to these larger works, Hardy published three collections of short stories and five smaller novels. However, despite the praise Hardy’s fiction received, many critics also found his works to be too shocking, especially Jude the Obscure. The outcry against Jude was so great that Hardy lost heart with his novel writing and returned to writing poetry.

In 1898, Hardy’s collection, Wessex Poems, was published. Before his death, Hardy had written over 800 poems, many of them published while he was in his eighties.

Hardy’s first wife, Emma, died in 1912. In 1914, he married Florence Dugale, who published her husband’s life history after his death.

Thomas Hardy died on January 11, 1928, at the age of 87. His ashes were buried in Poets’ Corner at Westminster Abbey, alongside many of his literary heroes.