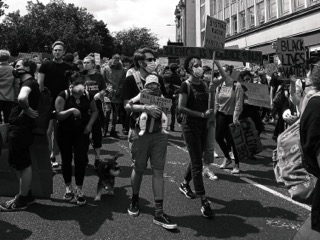 The Toppling of Edward Colston

The recent toppling of the statue of Edward Colston in Bristol city centre has brought back into the spotlight the question of how can we best utilise our public spaces to offer a narrative reflective of the spectrum of social, emotional and lived experience in Britain today.

Edward Colston was a prominent 17th century Bristol-based financier, businessman, and an integral part of The Royal Africa Company. This was a company which traded in human life, providing enslaved individuals from Africa to the wealthy households of Britain and later the USA. Much of the wealth that the city of Bristol is based upon was derived from the trade of slaves as well as other types of trade that utilised slaves in their production, sugar being one of the most notable.

The fact that there has been a statue of such a ‘revered figure’ in the centre of the city for so long has been in dispute for the past few years. The Black community in Bristol has called for the statue’s removal or at the least for an additional plaque to be added, highlighting Colston’s activities and the source of his wealth rather than the idea of it being, as it stated on the plinth, ’a memorial of one of the most virtuous and wise sons of the city’. In itself the statue was never a representation of Colston of and from his own time. The statue was commissioned and erected in 1895, over 100 years after his death, as part of the city’s Victorian focus and romanticism of certain figures of the past.

During the Bristol #BlackLivesMatter protest, one of many globally which was precipitated by the death of George Floyd by a US police officer, the statue was pulled down and unceremoniously dumped into the harbour. Parallels have understandably been drawn between the statue’s recent fate and the fate of the slaves on the Royal Africa Company trading ships. Between 1662 and 1731, the Company transported approximately 212,000 men women and children, of whom 44,000 died and were thrown overboard en route to Britain and the USA.

Following the protest in Bristol, there have been numerous calls for other statues representing individuals with similarly racist ideologies and behaviours to be removed. In London the statue of Robert Milligan, an 18th Century slave trader, has been removed from West India Quay. In Antwerp, Belgium, a statue of King Leopold II has been removed from a public square, allegedly because it posed a ‘public safety issue’ after being set on fire, and others around the country had paint thrown at them. In Oxford, the ‘Rhodes must fall’ campaign for the statue of Cecil Rhodes to be removed from the Oriel College facade, has regained momentum, now with the support of the local city council.

The question is not about destruction of the past, or the erasure of history but about how past events, past behaviour, and past ideology can be given a, potentially unwitting, platform and credibility in the present. The control of a country’s mindset and its ideologies can be determined to a large degree by the public signs and signifiers that surround its inhabitants daily. That which is visible in social spheres, the language used, the stories told all serve to create the ongoing narrative of a society.

It is impossible to ignore the ‘inadvertent’ glorification or ‘accidental’ validation of values that are universally considered socially and morally reprehensible and this stance can be seen in the recent statement released regarding Rhodes’ statue . The Leader of Oxford City Council highlighted the necessity to consider what is socially imbued in artefacts positioned in full view. She advocates for Oriel’s “moral obligation to reflect on the malign symbolism of this statue” and the necessity to apply for its safe removal to a suitable place, such as the city museum or the Ashmoelean. There the ideologies that created it can be enervated and contextualised rather than maintain an ongoing imperceptible grip on the university’s, the city’s and the wider country’s unconscious.

Proponents of the need for these artefacts to remain ‘in situ’ often cite the need for democratic opportunities within which to deal with them, alongside the argument that to retain these images in the public realm is to ensure that history is learnt from and never repeated. Arguments against this range from the concept that to relegate them to protected arenas of learning like museums and galleries ensures their continued usefulness without the addition of glorification, alongside the argument that the democratic process, as held in the UK, is part of a social mechanism where racism is prevalent, and the system is already unfairly skewed.

Do I Need a Degree for a Career in Software Development?
A Basic History of Racial Inequality in America: Part 2