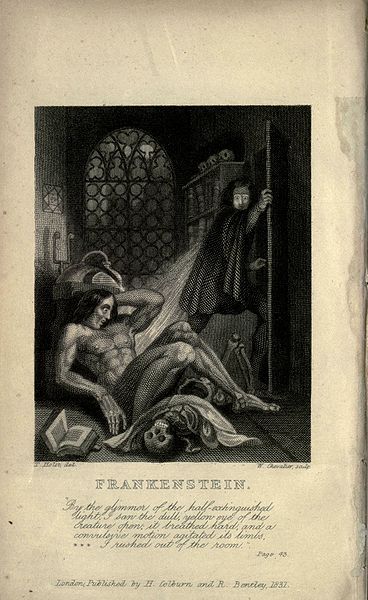 The Early Years of Mary Shelley

Mary was the daughter of philosopher and political writer William Godwin. Her mother was the feminist Mary Wollstonecraft, who wrote The Vindication of the Rights of Woman (1792). Wollstonecraft died shortly after Mary’s birth, sadly, and Mary and her half-sister Fanny were raised by their father, until he married Mary Jane Clairmont in 1801.

Mary did not like her stepmother, who was happy to educate her own children (Clairmont had two children prior to the marriage, and a son with William), but would not agree to doing the same for Mary. However, although Mary was denied a formal education, she made use of her father’s extensive library. She could often be found reading, sometimes by her mother’s grave, and it wasn’t long before she began to write stories of her own. In later life, Mary’s The Life and Letters of Mary Wollstonecraft explained that, ‘As a child, I scribbled; and my favourite pastime, during the hours given me for recreation, was to write stories.’ It would be the foundation for a literary life and career, and in 1807 Mary published her first poem, Mounseer Nongtongpaw, through her father’s company.

In 1814, Mary began a relationship with a student of her father, the Romantic poet, Percy Bysshe Shelley. Shelley was married to his first wife when he and the teenaged Mary fled England together, accompanied by Mary’s stepsister, Jane.

Travelling around Europe, the couple struggled financially. They also faced personal crisis when their first child only lived for a few days after birth.

It was the following summer that was to seal Mary’s place in literary history. On a visit to Switzerland, the Shelley’s were with Jane Clairmont, Lord Byron and John Polidori, entertaining themselves one rainy day by reading a book of ghost stories. Lord Byron suggested that they all should try their hand at writing their own horror story. As a result, Mary Shelley began work on what would become her most famous novel, Frankenstein, or the Modern Prometheus. The dramatic scenery doubtless served to inspire, and Mary’s parents’ philosophical background surely influenced, to a degree at least, the underlying themes she put into her novel. Whatever the case, a classic was born.

Mary Shelley died in 1851 at the age of 53 and is buried in Bournemouth.

The Sounds of Study
Opinion: When should we Apply to University?