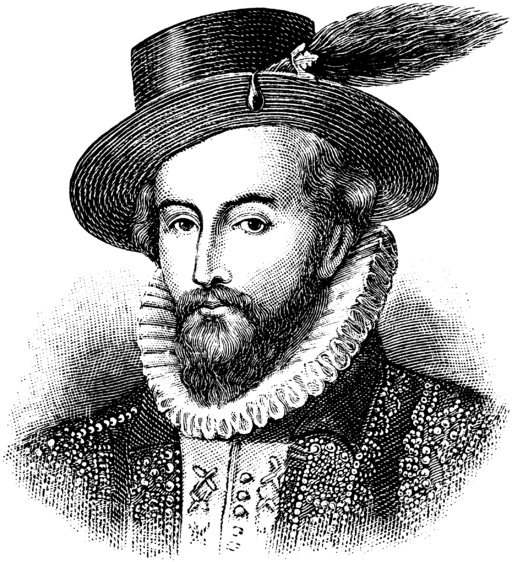 Walter Raleigh, one of the most famous explorers in the history of Britain, was born in 1552 or 1554. Although the exact year of his birth is uncertain, it is widely believed his birthday was on January 22nd.

The youngest of five sons, Raleigh grew up in a farmhouse near the village of East Budleigh in Devon, with his mother Catherine Champermowne and his father, also called Walter. Raised as a devout Protestant, Raleigh’s family faced persecution during the reign of the Catholic Queen Mary I. As a result of Mary’s extreme treatment of his fellow Protestants, Raleigh developed a life-long hatred of Roman Catholicism at an early age.

When he was 17, Raleigh left England to fight with the French Protestants, known as the Huguenots, during the Wars of Religion. By 1572, however, he had returned to England, studying law and developing a love of poetry at Oxford University.

It was in 1578 that Raleigh set out on his first voyage of discovery. Travelling with his half-brother, Sir Humphrey Gilbert, he went to North America to find the Northwest Passage. They were never to reach their destination, however, as the mission turned into an attack against Spanish shipping; a crime for which Raleigh was briefly imprisoned.

Despite the disastrous end to his first voyage, between 1579 and 1583, Raleigh was employed as a soldier in the service of Queen Elizabeth I. He quickly repaired his reputation, in Ireland, when he orchestrated the siege of Smerwick, which established English and Scottish Protestants in Munster.

Helped by his handsome and self-confident demeanor, Raleigh became a court favourite, and Queen Elizabeth rewarded his loyalty with a large estate in Ireland, a knighthood, and the right to colonize North America. In 1586, he was appointed captain of the Queen’s Guard. Sir Walter Raleigh wanted to set up a colony in North America, but the queen forbade him to leave her service. Between 1585 and 1588, though, Raleigh organized a number of expeditions across the Atlantic. It was during these missions that Raleigh brought potatoes and tobacco home to England for the first time.

Queen Elizabeth was so fond of Sir Walter Raleigh that when he made his courtship and subsequent marriage to one of her maids, Bessy Throckmorton, in 1592, she went into a jealous rage and imprisoned them in the Tower of London. Fortunately, she soon calmed down, and released Raleigh, who headed an expedition to Guiana (now Venezuela) to hunt for El Dorado, the legendary land of gold. This expedition, along with those to Cadiz and the Azores reinstated him in the queen’s favour.

Although he had managed to evade the ultimate anger of Queen Elizabeth I, Raleigh was not so fortunate with her successor. The peace loving King James I did not agree with Raleigh’s aggressive actions toward the Spanish. Seeing a chance to get rid of Raleigh, his enemies worked to taint his reputation and he was soon charged with treason and condemned to death. Despite this, in 1603 King James had a change of heart, and Raleigh was sentenced to imprisonment in the Tower instead, where he lived with his wife and servants and wrote the book History of the World, in 1614.

In 1616 the king finally allowed Raleigh his freedom, in order to search for gold in South America. Yet, again, Raleigh acted against the king’s approval by invading Spanish territory, and on his return to England he was arrested once more. Never having learned his lesson, Sir Walter Raleigh was ultimately executed at Westminster on 29th October, 1618.

Raleigh may be remembered most widely as a daring, even dashing, explorer, for charming a queen and for bringing us the potato. His fatal flaw of never heeding the wishes of those in more prominent positions of power is less publicly acknowledged. Then again, such brash and rebellious behaviour was surely part of him and his successes, even it also inevitably led to his downfall.

Famous First Words – A Literary Quiz
Can failure ever be good for you?