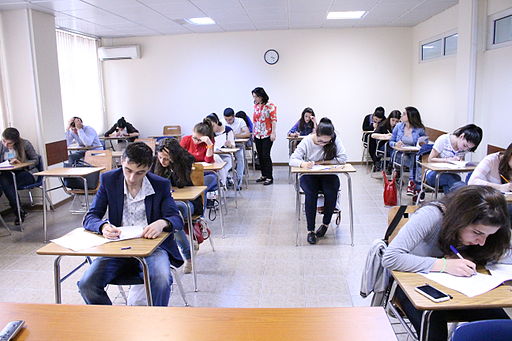 Should GCSEs and A levels be scrapped?

Patterns of work and employment change over time as science and engineering discover new materials and more efficient production processes to satisfy our constant need for goods and services. These processes create new opportunities, but all too frequently destroy established communities. Over the next 10 years current advances in IT, robotics and artificial intelligence are forecast to wipe out over one quarter of the of the occupations we now associate with white-collar professional work in, for example, law, medicine, banking retail services and commercial occupations. The “working class” experienced the phenomenon early in the industrial revolution, it is now the turn of the “middle class”.

Robert Halfon, chairman of the Educational Select Committee, wants the present system of secondary education to be scrapped, with GCSE and A levels replaced by a mixture of arts, science and vocational subjects – a baccalaureate curriculum as is common practice in Europe and the USA.

The British educational establishment have a track record for rejecting change, but often it has been for valid reasons; a lack of financial support, inadequate numbers of qualified teachers, difficulties in tame-tabling across a diverse range of subjects and last but not least the continual disruption of school management. Hence there are fewer opportunities, outside colleges of further and higher education that cater for students aged 16 and over, to introduce vocational subjects into schools, such as accountancy.

Far more important in the present climate, though, are the budgetary constraints in a period of continuing austerity. This situation makes it almost impossible to allocate resources (in terms of staff and practical facilities) and provide an innovative, mixed curriculum. Nor is it certain that middle class parents would be happy to see the GCSE “Gold Standard” exam at 16 abolished – or, similarly, high-performing grammar schools, who could see their specialist A-level 6th-form diluted. Both GCSE and A level examinations have acquired a certain cache in our deeply class-conscious society. Further, the proposals raise questions for those secondary schools without sixth forms and would be devoid of any focus on public examinations. Either money would have to be found for them to introduce the new curriculum from scratch, or they would have to be phased out, with the inevitable negative impact on local communities.

It is also likely that universities, who wield considerable influence on schools, might object that the new proposals would dilute academic attainment at 18. They would cite particularly those students wanting to study medicine, despite the fact that the same universities have been very quick to address the concerns of industry that their graduates are ill-equipped to face the challenges of work in the “real world”. This objection is likely to be the principle concern of the Russell Group of top universities led by Oxford and Cambridge. The British system is a hierarchy, in which the top echelons jealously guard their traditional status and social prestige.

However, trumping all these objections are the pressing concerns of the inadequate funding of the current system. Before introducing any more new innovations there are multiple issues to address; the inability to recruit and retain specialist teachers for one, to provide textbooks for another, and to fund the liberal arts subjects, especially music. The maintenance of good quality language teaching is equally vital.

In the 1870s Germany began to overtake Britain as a manufacturing nation. One of the contributing factors was that they developed specialist schools and universities as equals of their gymnasium provision. For this to happen in modern Britain we need a cultural change amongst the middle class, to accept that getting one’s hands dirty in a school workshop or lab is okay.

Children’s Mental Health – How does the UK compare?
What now for A levels?