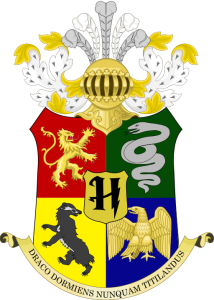 The Hogwarts school coat of arms, of Harry Potter fame.

Setting a children’s story within a school has been a staple of authors ever since 1749, when Sarah Fielding published The Little Female Academy. This book is believed to be the first story to be set entirely in a school environment.

Like many of the school-based stories that were to follow in its footsteps, The Little Female Academy was based in a boarding school, which allowed the author to expand the story beyond the confines of the classroom and into the personal lives of the children involved. It wasn’t until the nineteenth century, when improvements in education meant that children could learn to read, that school based stories grew in popularity, though – In 1857 Thomas Hughes wrote the acclaimed Tom Brown’s School Days, and in the 1880’s Talbot Baines Reed wrote a series of books called The Fifth Form at St Dominic’s.

With the introduction of the Education Act in 1870, there was an increase in the number of girls receiving an education. L.T. Meade began to write stories that focused on upper class girls at boarding schools who learned to be proper wives and mothers.

In the 1940’s Enid Blyton wrote her hugely successful St Clare’s series, beginning with The Twins of St Clare’s in 1941. These books were followed in 1946 by Blyton’s Malory Towers stories, which ran until 1951. While Blyton was entertaining young female readers, boys were enjoying the tales of the Greyfriar’s school’s hapless Billy Bunter. These tales about an overweight, often obnoxious schoolboy won the hearts of many, and created one of children’s literature’s first loveable anti-heroes.

With the rise of co-educational schools after the World War II, boarding school stories began to lose popularity, and state-run school stories took over, often with much grittier themes, such as in Geoffrey Trease’s 1950’s Bannerdale series, which featured two male and two female pupils from the school, and a single mother.

School-based stories had begun to lose popularity in Britain by the 1960’s, and with the exception of the California-based Sweet Valley High young teen sagas (which were fashionable for a while in the 1980’s), it wasn’t until J.K. Rowling’s Harry Potter series that school stories came back so strongly to the children’s literary genre. Whether the huge popularity of those few books will lead to a whole new generation of school stories, only time will tell.

The collapse of Iraq
Uniform Nation