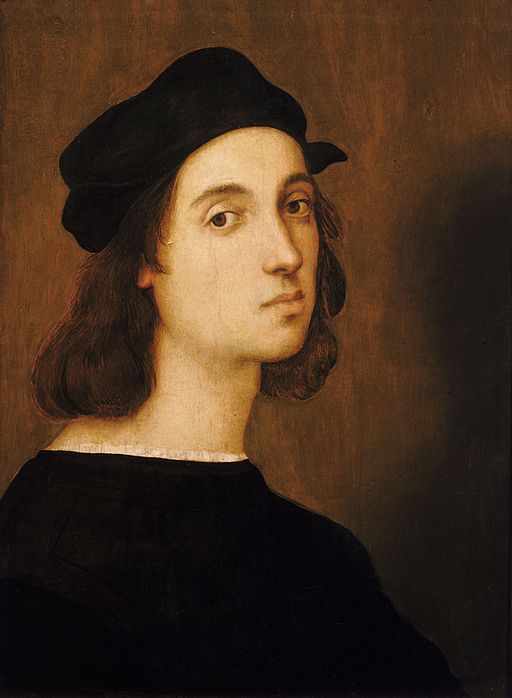 We recently featured a piece on our OOL site on the famous Italian artist and inventor, Leonardo Da Vinci. Here, we take a look at the history of one of the other great Italian painters, Raphael.

On April 6, 1483, the Italian Renaissance painter and architect Raphael was born in Urbino, Italy. Originally named Raffaello Sanzio, he was to become one of the most celebrated artists of the day.

Raphael’s father, Giovanni Santi, was a painter. He taught his son basic painting techniques and exposed him to the principles of humanistic philosophy at the Duke of Urbino’s court. Raphael was only 11 when his father died, and he was tasked with taking over managing his father’s painting workshop. Rather than this being a job beyond the limits of a young child, Raphael soon discovered a talent that surpassed his father’s. By the time he was a teenager, he’d been commissioned to paint for the Church of San Nicola in nearby Castello.

In 1500 a master painter known as Perugino invited Raphael to be his apprentice in Perugia, in central Italy. During his four year apprenticeship Raphael helped to paint frescoes at the Collegio del Cambia. He developed a unique painting style which led to his early religious works, The Mond Crucifixion (c1502), The Three Graces (c..1503), The Knight’s Dream (1504) and the Oddi altarpiece, Marriage of the Virgin, also completed in 1504.

In 1504, Raphael left his apprenticeship and moved to Florence, where he was influenced by other Italian painters, such as Leonardo da Vinci, Michelangelo and Masaccio. Raphael closely studied the details of their work, and added an even more intricate style to his own.

In 1507 Raphael created his most ambitious work in Florence, The Entombment, before moving to Rome in 1508 to paint in the Vatican Stanza under the patronage of Pope Julius II. Whilst there, from 1509 to 1511, he worked on what was to become one of the Italian High Renaissance’s most highly regarded fresco cycles -the Stanza della Segnatura series of frescos, which includes The Triumph of Religion and The School of Athens. It was during this same period that Raphael also produced his famous Madonna of the Chair and Sistine Madonna paintings.

By 1514, Raphael also began work as an architect, after the death of the pope’s architect Donato Bramante. Raphael was employed to create the design for a chapel in Sant Eligio degli Orefici. He also designed Rome’s Santa Maria del Popolo Chapel as well as part of Saint Peter’s new basilica. His architectural work moved now beyond religious buildings to designing palaces. Raphael’s architecture honored the classical sensibilities of his predecessor, Bramante, but it also incorporated ornamental details. Such details would come to define the architectural style of the late Renaissance and early Baroque periods.

Suddenly, on his 37th birthday in 1520, Raphael died in Rome, whilst working on his largest painting, The Transfiguration. His body was interred at the Pantheon in Rome.

Raphael’s influence in Italy’s advancing Baroque period was far reaching, and he continues to be regarded as the leading artistic figure of Italian High Renaissance classicism.

The Magic A*
What should you do if your child doesn’t get their first choice school?