Padres and Priests in the Great War 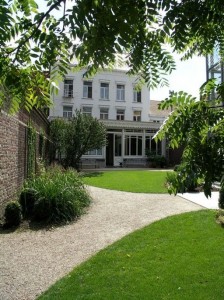 British clergymen were not required to bear arms, but many volunteered to serve with the BEF in Flanders and although they did not fight, their sons volunteered in droves to serve at the front. Some 30% of young officers who were killed in the first years of the war were sons of clergymen.

Church of England clergymen found it difficult to get close to the ordinary soldier in the trenches. Padres were dependent on the goodwill of the commanding officer, and the troops saw them as part of the establishment. The army hierarchy expected the clergy to preach patriotism and encourage soldiers to kill with enthusiasm. They were ordered to put “vim and fire” into their sermons. After the violation of Belgian neutrality, many were only too willing to do so. Typical of this type was the Bishop of London, Arthur Winnington-Ingram, who regularly let loose a litany of hate against the enemy whilst standing on a hay cart, draped in the Union Jack.

Others performed their pastoral and Christian roles with compassion, comforting the dying and maimed, administering last rites, and acting as much appreciated welfare workers, writing letters for wounded and blinded men. Typical of this type of clergyman was Tubby Clayton, who ran a shelter named Talbot House a few miles behind the forward trenches. It became a temporary haven for troops of all denominations, where shell-shocked men could rest and enjoy some semblance of normality with their fellow soldiers. Talbot House was, in a sense, the first traumatic stress disorder centre, though the term was unknown at the time.

French priests were also able to get close to their fellow countrymen. They were not part of the French establishment and shared the same class background as the ordinary French soldier. They were also respected for their work acting as battlefield stretcher-bearers, and in some cases, medical orderlies. The practice of the confessional also helped bond priest and soldier. At the other end of the scale, ultra right-wing Catholics did the French church no favours by preaching that the war was a punishment for decades of apostasy.

After the war there was a falling away of church attendance and a growing disillusion with established religion. The strident appeals to “loyalty”, “duty”, “sacrifice” and “just cause” preached in the war years sat uncomfortably with the Christian doctrines of compassion, forgiveness and charity. What was a clergyman to say to a grieving mother or wife when asked if their loved one had died for a worthy cause and a better world?

Social Change after the Great War
Debt: An Intractable Problem of the British Economy