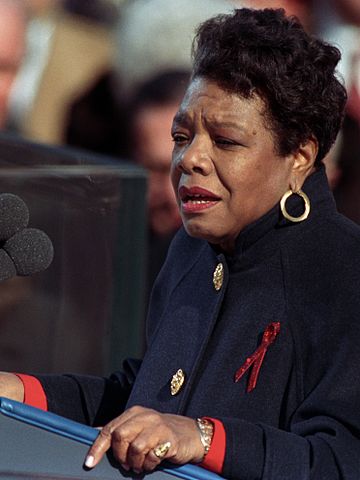 Maya Angelou – The Woman Who Rose

Born Marguerite Annie Johnson in 1928, Maya’s stage name came from her little brother, Bailey Jr, who called her “Mya Sister”. Maya, an African-American woman, civil rights activist, poet, author and singer, is best known for her poem “Still I Rise”. Performing this poem herself here: https://www.youtube.com/watch?v=qviM_GnJbOM  , Maya lifts the hearts of all those who have ever experienced oppression, showing that she will overthrow those who attempt to hold her back. The poem ends:

I’m a black ocean, leaping and wide,
Welling and swelling I bear in the tide.
Leaving behind nights of terror and fear
I rise
Into a daybreak that’s wondrously clear
I rise
Bringing the gifts that my ancestors gave,
I am the dream and the hope of the slave.
I rise
I rise
I rise.

The road to the strength that Maya Angelou shows in this poem, however, was one of racism and persecution of a kind frequently experienced by people of colour at that time in US history. Angelou was persuaded, when she was in her 40s, to write her autobiography, which eventually led to her publishing the first book in a series documenting her life. This book was entitled, “I Know Why the Caged Bird Sings”. Maya starts her story aged 3, when her parents divorced and she was sent away to live with grandparents. The book, and those which followed, are some of the first in a genre known as ‘autobiographical fiction’. While the key parts of the story are true to life, aspects of the book are a combination of her own truth and those of others. The themes include racism, sexism, being a single mother (Angelou had her son, Guy, aged 16) and rape.

At just 8 years old, Angelou was sexually assaulted and raped by her mother’s boyfriend. The boyfriend was found guilty, but released from prison after being held for just one day. However, almost immediately he was murdered, most likely by Angelou’s own family members. Taking the guilt as her own, Maya refused to speak for nearly five years because, she explained, she felt that her voice, in naming her rapist, led to his death, and with that power her voice may lead to the deaths of others.

Literature to Challenge a Society

Eventually coaxed out of her silence by a family friend, Angelou went on to use her powerful voice to be part of the American Civil Rights Movement. Close friends with Malcom X, she was devastated by his assassination, which happened while she was working with him to develop a civil rights organisation in the USA. A second blow came when she was helping Martin Luther King to plan a civil rights march. He was also assassinated before the plans were completed.

Angelou’s life was filled with performance; a singer, dancer and writer, she was the first black woman to write a screenplay for a major film, ‘Georgia, Georgia’, which was nominated for a Pulitzer Prize. In 1993, she became the first female poet and the first African-American poet in history to be part of the recital for the inauguration of a US President – President Bill Clinton. Her poem was called ‘On the Pulse of Morning’, a long, symbolic piece which looked back at the darkness of history, and forward to the power that humans have to work with nature and create a positive, beautiful future. ‘On the Pulse of Morning’ is truly a piece for our time, as the climate change crisis develops and our politics are changing, the message of hope that it brings is one that would be of value to all of us, especially our children. This recital can be viewed via the following link:https://www.youtube.com/watch?v=59xGmHzxtZ4

There are few people whose lives are as fascinating as that of Maya Angelou. To home educators she offers the chance to read an unusual form of autobiography, study her extraordinary poetry. At the same time she ensures you learn about the Civil Rights Movement she and her work were part of. Everyone should be inspired by this woman. Despite a truly traumatic childhood, she still became one of the most powerful voices of our time.

Analysis of Maya Angelou’s poem ‘On The Pulse of Morning’ – https://owlcation.com/humanities/Analysis-of-Poem-On-the-Pulse-of-the-Morning-by-Maya-Angelou

Options Available After GCSEs and A levels
Studying with Asperger Syndrome