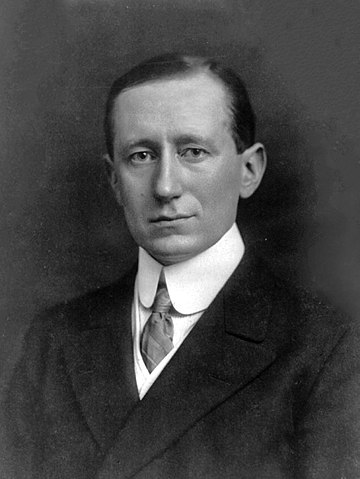 On the 12th December 1901, Italian physicist Guglielmo Marconi sent the first radio transmission 2000 miles across the Atlantic Ocean. Until then, it had been believed impossible to transmit anything further than 200 miles, under the assumption that it would be blocked by the curvature of the earth.

Guglielmo Marconi was born in Bologna, Italy, on 25th April, 1874. He studied physics and became interested in the transmission of radio waves after learning of the experiments of the German physicist Heinrich Hertz. Determined to expand on Hertz’s work on radio waves, Marconi began his own experiments in Bologna in 1894 and soon succeeded in sending a radio signal over a distance of 1.5 miles. His work was not encouraged in Italy, however, and so he moved to England in 1896, where he formed his own wireless telegraph company. Here he began to progress, and he was soon sending transmissions from distances farther than 10 miles. In 1899 he succeeded in sending a transmission across the English Channel.

Keen to push his experiments further, in 1900 Marconi enlisted the help of Professor John Ambrose Fleming; who became a scientific advisor to the Marconi Company. Working with Fleming, they attracted the best engineers in the field to further the project, including radio scientists Reginald Fessenden and Lee de Forest. Together they developed a spark technology method of radio transmission. Soon, Marconi’s greatest achievement came: on December 12th, 1901, when he received a message his company had successfully sent from Cornwall in England to St. John’s, Newfoundland.

The transatlantic transmission won him worldwide fame. He described his achievements in the following recollection: “…Since 1895, from the time I started my experimentation, I had the strong intuition, I would almost say the clear and certain vision, that radio transmission would be possible across vast distances. For this reason, I decided in 1900 to have two powerful radio stations built – one at Poldhu, in England, and the other one on the coast of the United States of America. The construction of these two stations, which involved risking a considerable sum of money, was completed in August, 1901. However, a short time later, a storm damaged the aerials of the English station and a hurricane destroyed the antennas of the American station. This incident, although very serious, did not deflect me from my purpose, but it induced me to modify my plans, having a simple aerial built for the English station and designing, for the American coast, a provisional receiving station in which the antenna would consist of a simple aerial line born aloft by a balloon or a kite. For the site of the receiving station, I chose a hill near the town of St. John’s, Newfoundland…. My assistants in England had orders to transmit a repeated series of the letter “S” of the Morse Code, at a determined speed, during certain pre-arranged hours. The apparatus was necessarily very primitive and today, looking back and thinking of those early instruments, we cannot but marvel that the experiment turned out so successfully…”

In 1909, in recognition of this amazing achievement, Marconi was jointly awarded the Nobel Prize in physics with the German radio innovator Ferdinand Braun. Marconi continued to work on short range radio transmission until his death on 20th July 1937. He was just 63 years old. On the day of his funeral every one of the British Broadcasting Corporation (BBC) stations observed a two minute silence in tribute to his contributions to the development of radio.

Why is Mark Twain Still so Important today?
Pursuing Passion for Public Service needs to be Better Rewarded