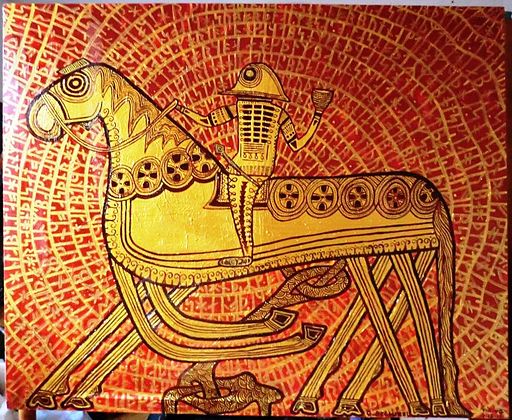 The Legend of Black Peter

In Britain and America, Father Christmas (Saint Nicholas) is a central figure of the Christmas celebrations. but in northern Europe and Scandinavia, a more sinister figure known as Zwarte (Black) Piete, is also part of the Christmas rituals…

There are two distinct traditions accounting for the derivation of this character. The first is the pagan myth of the “Wild Hunt of Woden.” In it, the Norse God Odin rides a white horse, Sleipnir (depicted above), through the night air as the leader of the Wild Hunt, accompanied by two black ravens, Huginn and Miersinn, who listen at chimneys and tell Woden who has been good and who has been bad during the year. Bags containing sugar and sweets for the good children are handed out, but also brought is a birch rod made from willow branches with which to beat those who have been naughty.

With the dying of the old Norse religion, the church appropriated the Woden legend to conform to Christian beliefs. Black Peter arrives from Spain at the seaports of Northern Europe and is paraded through the streets on a white horse, welcomed by children singing Christmas carols. He is accompanied by Saint Nicholas – Santa Claus – who distributes mandarin oranges to those of them who, again, have been good throughout the year. In Holland and elsewhere along the Baltic coast, children put their shoes out filled with sweets and carrots for Black Peter’s horse.

The distribution of the oranges almost certainly has a basis in fact: sea trade between Spain and what is now Holland and Belgium thrived during the medieval period and the only source of oranges was Spain, providing a rich source of Vitamin C for Europe’s northern ports. Vitamin C, of course, prevents scurvy, which was a common winter disease all across the continent in those times.

The legends are strongly linked, then. In the medieval tradition, Father Christmas is riding a white horse, just like the Norse Odin. In both legends the good children are separated from those who have been naughty. And finally, it can be said that both traditions echo the cold winds of the winter solstice, with snow and howling storms blowing over the chimneys in the dead of night.