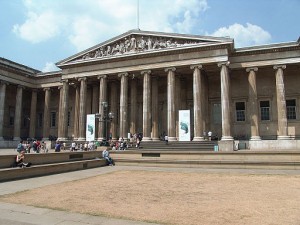 “Germany: Memories of a Nation” shows at the British Museum

At the beginning of November, Neil McGregor, Director of the British Museum, gave a series of short radio broadcasts ranging over German history from Martin Luther’s translation of the bible into the native venacular, to the nation’s Wirtschaftwunder (“economic miracle”) post 1948. It used many common, everyday objects of the time to illustrate its points, such as the Volkswagen car. Through such things was illustrated the history of the country and of its pivotal place at the heart of Europe, both in time and place.

Essentially, MacGregor tells a series of short, informative stories easily remembered, simply and with assurance, emphasising cultural, economic and social factors in Germany’s past without undue emphasis on kings, war or imperial hubris. This history is a welcome antidote to the obsession with the 12 years of Nazi power. In this exhibition, The reformation, The 30 Years War, music and intellectual initiative are all given their proper place in national history. The history is human rather than political. It is also of contemporary importance, and on closer inspection highlights the source of some of the problems we in Britain are always hearing about our relationship with the EU and explains some of the reasons why.

MacGregor uses his descriptions of the historical items to suggest not only continuity but also Germany’s breach with her past, which occurred decisively in January 1979, the date that the full horror of the Holocaust was broadcast in the Federal republic. The period of denial was over then. Later, Germany would begin its transformation with the fall of the Berlin Wall and the building of the new Reichstag, with its glass dome through which ordinary Germans could symbolically “watch over” the politicians legislating in their name, in stark contrast to being watched themselves as in times past, by Gestapo and the Stasi.

The 100 objects chosen by MacGregor are on exhibition at the British Museum. His book, “Germany: Memories of A Nation”, is published by Alan Lane.

The School We’d Like
The Arts versus The Sciences