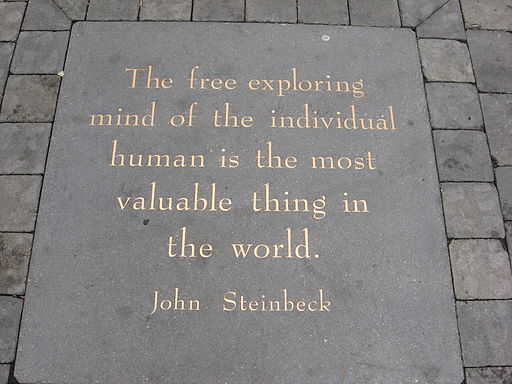 Novelist John Ernst Steinbeck Jr. was born on 27th February, 1902, in Salinas, California. A clever but shy boy, Steinbeck grew up in a low income but happy family with three sisters. Steinbeck decided to become a writer at the age of 14. However, he found it hard to settle in an academic environment, and in 1925 he walked out of Stanford University without a degree.

Determined to make a go of it as a freelance writer, he moved to New York City, where he found work as a construction worker and a newspaper reporter. Before long however, he was back in California, where he took a job as a caretaker in Lake Tahoe. It was during this time that Steinbeck wrote his first novel, Cup of Gold (1929). His first novels, The Pastures of Heaven (1932) and To a God Unknown (1933), didn’t do very well, but his fourth novel, Tortilla Flat (1935) gave him a taste of success. He would perhaps be best known to recent GCSE students for his 1937 novella Of Mice and Men, having been one of many texts studied at that level for a number of years. Among older generations it may be his  1939 novel, The Grapes of Wrath.

Of Mice and Men is the story of a dispossessed Oklahoma family and their struggle to carve out a new life in California at the height of the Great Depression, and captured the mood of the USA during the period. At the height of its own popularity, The Grapes of Wrath sold 10,000 copies per week, and it won him a Pulitzer Prize in 1940.

After a spell as a war correspondent for the New York Herald Tribune during World War II, Steinbeck travelled to Mexico with his marine biologist friend Edward F. Ricketts. Together they wrote the book Sea of Cortez (1941).

Steinbeck continued to write throughout his life, and later works included Cannery Row (1945), Burning Bright (1950), East of Eden (1952), The Winter of Our Discontent (1961) and Travels with Charley: In Search of America (1962). In 1962 Steinbeck received the Nobel Prize for Literature. Four years after this crowning achievement, he died of heart disease on December 20, 1968, at his home in New York City. His work, though, lives on in more than good health, is till well appreciated, and much read and played.

Is Donald Trump the most Controversial President in History?
What to do if you’re struggling with your course