Injury and Disease in the Trenches 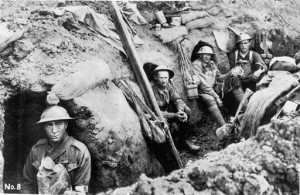 Senior commanders should have known what to expect in 1914. The American Civil War, The Boer War and the Russo-Japanese war of 1905, were all harbingers of what the impact of artillery and modern rifle power could inflict on troops in the field. At the Battle of the Somme, the Maxim machine gun could fire 600 rounds per minute, ripping apart internal organs and splintering bones.

The fertile fields of Flanders were a deadly place to sustain injury; the mud was rich with manure and pock-marked with stagnant water holes. Even slight wounds soon became gangrenous as there were no antibiotics or penicillin. Trench warfare increased the number of head, neck and facial injuries; inexperienced troops continually exposed their upper bodies to look at the enemy trench positions. The “tin helmet” was introduced in 1915 and helped reduce head injuries, but not facial and neck laceration.

Well over 12% of chest wounds were lethal; both rifle bullets and white-hot shrapnel tore open men’s chests and carried bacterial organisms into the chest cavity from filthy uniforms, again with the almost certain danger of gangrene.

Exploding shells and standing in flooded trenches were the cause of most leg injuries. Men were terrified by gas attacks, particularly as the first gas masks were extremely primitive, ineffectual and often caused them to panic. Men were blinded and their faces burned by chlorine gas.

Cholera was another ever-present danger, being spread by lice, particularly as regular washing and washing cloths were difficult. On the Eastern Front there were medical facilities where primitive or non-existent cats and dogs were killed, as it was believed that they helped spread bacterial disease. Rats, though, were everywhere on the battlefield.

Shell-shock (Post Traumatic Stress) was common. It was believed, not without reason, that this condition had a physical rather than a psychological cause, from the vibration of the brain under fire. Shell shock was often interpreted as cowardice by unsympathetic medics, however.

By 1917, military medicine finally began to respond to all this misery. Medical units were moved nearer the front line so that treatment could begin swiftly. Routine use of blood transfusion was in use by 1916, and in 1917 the first blood banks were established on the Western Front from stockpiles of blood using sodium citrate to prevent blood coagulation. The Thomas Splint, invented by Dr. Hugo Owen Thomas, was in common use by 1916. In 1914, 80% of casualties with broken legs died. By 1918, 70 – 80% survived.

Perhaps the most outstanding achievement of the First World War was the advances made in facial plastic surgery, largely pioneered by a New Zealand surgeon, Harold Gilles, who set up a specialist hospital in Sidcup, Kent. He treated over 2,000 patients injured  in the first battle of the Somme alone. Gilles pioneering work was to come to full fruition in the Second World War, treating fighter pilots burned in the Battle of Britain.

Opinion: Do GCSE’s have a future?
The collapse of Iraq