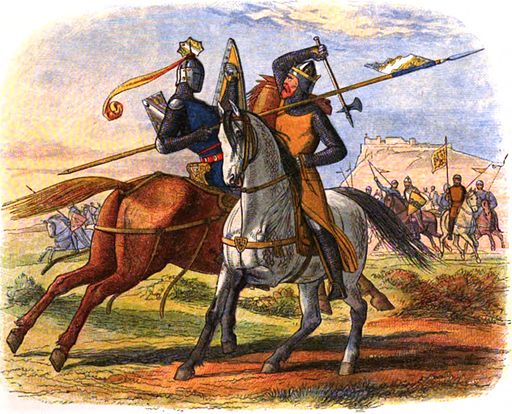 There has always been a traditional rivalry between England and Scotland when it came to sport, and this weekend’s football match will be no exception. But where does this rivalry stem from? Here’s a historical breakdown of the events that have lead to hundreds of years of English/Scottish rivalry.

In AD 122, after the Roman invasion of Britain, Emperor Hadrian ordered the building of Hadrian’s Wall – separating England from the Caledonian tribes of Scotland that the Roman forces couldn’t control.

In 1072, after establishing his reign over England (after the invasion of 1066), William of Normandy invaded Scotland. His troops defeated King Malcolm III of Scotland, and forced him to hand over his son Duncan as a hostage. This incursion was set to be the first of many from south of the border.

In 1296 King Edward I of England invaded. He overthrew Scotland’s King John and this lead to William Wallace’s uprising, which then defeated the English forces at the Battle of Stirling Bridge. Wallace ruled Scotland as Guardian of the Realm until 1305 when he was captured by the English and executed for treason. This particular tumultuous period has in more recent years been the focus of the film Braveheart. The end of that film also makes reference to the next major clash between the two countries (still often celebrated, and almost certainly on some flags on Saturday…);  1314’s Battle of Bannockburn, when the English King Edward II was defeated by Robert the Bruce. This was the moment when Scotland secured its independence, albeit they had to wait until 1328 for official English recognition, when King Edward III signed the Treaty of Northampton.

The next clash saw Scotland on the offensive. In 1512 an alliance was formed between them and France. So when Henry VIII attacked France, Scotland’s King James IV invaded England. However, this action ended in disaster, when he was then killed at the Battle of Flodden Field.

In 1587 Mary, Queen of Scots was executed for treason on the orders of Queen Elizabeth I, after she feared she was planning to steal the throne from her. If Elizabeth took an extreme action against Scots nobility here in her lifetime, however, her death, where-after she did not leave an heir, meant that King James VI of Scotland inherited the English crown. This brought the two countries together under one monarch. Later, in 1707, the Act of Union brought the English and Scottish parliaments together. This was to be the most lasting and influential moment between the Scots and the English: It created the new state of Great Britain.

Relations may have been cemented between the two countries legally, but it did not mean everyone was happy with it. Some spoke out, others took more direct action. The most famous came in 1745, when Bonnie Prince Charlie laid claim to the Scottish and English throne. His Jacobite army was initially successful, but ultimately it was defeated at the Battle of Culloden by the brutal English force led by the Duke of Cumberland.

Perhaps some of the most enduring ill-feeling between the two countries came as a result of the English, in the eighteenth and nineteenth century, performing the Highland Clearances. This involved English landlords evicting their tenants to clear the land for sheep, cattle and mining. Many families were burnt out of their homes.

A less bloody way for the countries to fight each other was found in 1872, when the first official international football match was played between England and Scotland, at Hamilton Crescent, Glasgow. The match ended 0-0.

As the world progressed toward what we know as modern politics, in 1934 the Scottish Nationalist Party (SNP) was formed.

Whilst Margaret Thatcher was Prime Minister, there were many claims that she used Scotland for political experiments. Scotland lost one-fifth of its workforce within the first two years of her tenure, as state subsidies were pulled from the mining, steel and textile industries. Neither was it popular when in 1989 Scotland was handed the poll tax a year ahead of England.

In 1997 a referendum was passed which led to the creation of the Scottish Parliament in 1999. While Scotland is still part of the United Kingdom, there are often calls for it to become independent once again, including this very moment in time. One recent referendum to regain this status has been held, and though it failed, another has just been announced.  Whatever happens in the future, the traditional rivalries will undoubtedly remain; especially on the sports field.