Hellfire Jack and the Clay-Kickers of the Somme 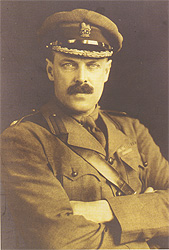 Battlefield tourists walking along the Messene Ridge in Flanders today will still see clearly the grass-covered contours of First World War trenches and shell holes, all marking out the scene of one of the conflict’s most bloody and destructive engagements. It is the landscape of the battle of the Somme, and one of its many scars is the Lochnagar Crater, some 70 meters deep. The result of a particularly devastating blast, this crater has its own distinctive history of what happened there, in June 1917.

On military maps of the period it is referred to as Hill 60. But at 3.10 a.m. on 7th June, the hill and its surroundings were blown sky high by an explosion which split the ground with the force of an earthquake; its pillboxes, machine gun nests, and observer posts were obliterated, and all German personnel there were killed, with their remains scattered over more than 100 yards of ground. It was claimed at the time that the explosion could be heard in Downing Street and Switzerland.

The man responsible for this blast was one John Norton-Griffith, also known as “Hellfire Jack”, and his unique band of specialist civilian miners and excavators, who had years of experience working underground both at coalfaces and as constructors of the Manchester sewer system.

After an unsettled youth and army service in the Boer War, Norton raised the first unit of the Royal Engineering Tunnelling Company to dig tunnels and lay mines under the trenches.

Norton’s recruits were often civilians who had been rejected by the army because of ill health (weak lungs, for example), or because they were underage (some were as young as 14 when they joined the “Clay Kickers”). They were given little formal military training, instead being required to work quickly and silently in semi-darkness, breathing feted air in wet conditions, and in constant danger of explosions and cave-ins, often to a depth of as much as 100 feet underground.

Despite all these difficulties, Norton’s men proved quick at their work, their rate of clay excavation at an average of seven meters per day compared to an average of 3 meters dug by the Germans in the opposite direction. Between 1914 – 17 they excavated some 22 tunnels, laying about 958,000 lbs of explosives. They lost 7,000 men over the same period. Their families, however, were not told how they died or of the nature of their work.

After 1917, the clay-kickers could not keep up with the rate of British troop movements above ground, and they were redeployed as road builders and general labourers in the trenches along with Chinese coolie workers. Jack himself was redeployed to organise sabotage in the Romanian oil fields – which he did very successfully.

After the war, Jack worked as a civil engineer in Asia and Egypt. In 1930, however, he went for his usual morning swim, only be found later with a bullet through his head. The official verdict was suicide, though there was rumour that he may have been assassinated by Russian enemies.

The Rise of Sterling: For good or ill?
What is a Well-rounded Education?