German and British Commemorations of War 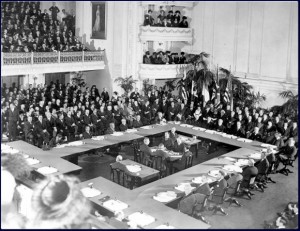 The damaging effects of the Treaty of Versailles have caused the years between wars to be seen as a part of both conflicts for Germany.

Today is the anniversary of the start of World War One. Throughout 2014, the British media has been full of films, documentaries and books commemorating the first world war. Villages and towns have mounted exhibitions to illustrate the community’s contribution in human sacrifice to the conflict. Apart from rather formal ceremonies attended by local officials and national dignitaries, though, the German people have largely ignored the event.

There are few stone memorials to the first world war in Germany, and Germans do not tend to gather at such sites. There is no special day of remembrance. Memorials that are in the public domain do not list the names of the dead, rather they tend to emphasise the laying down of life for an abstract concept, or commemorate an abstraction: “For the Fallen.”

Throughout Britain, it is very different, with every town, village and hamlet having its own memorial, listing individuals killed between 1914 and 1918 irrespective of rank or class. Remembrance Day is marked each year by the ageing survivors and their living relatives and younger families. Germans do not do this, but commemorate with immaculately kept private graves and, in Catholic states, by small cameos at the centre of Christian crosses. It is altogether a more private affair.

These differences in practice can be explained by different perceptions of historical experience. Germany rightly regarded the outcome of the first world war as a catastrophe. They resented the peace settlement imposed on them by the victorious powers. For them there was no satisfactory outcome which might have, to some degree, balanced the loss of life, whereas in Britain they could plausibly argue the defeat of an aggressive power justified all the sacrifices, and were thereafter content to honour the generation who died.

Similarly, at the end of world war two, Germany was comprehensively defeated and occupied. German society was forced to face the shame of Nazi inspired atrocities carried out by their armies. Normality could only be achieved at the price of atonement and the building of a new democratic society. Once again Britain was on the winning side and the victors were free to remember and honour their dead in a collective way.

Furthermore, Germans tend to view both the first and second world war as one long continuous conflict, by way of the 1920’s inflationary crisis and the unemployment of the 1930’s. It is a view largely shared by contemporary German and British Historians alike. Hence the first world war makes no outstanding impact on the German psyche.

Finally, it can be argued that “our finest hour” was the Battle of Britain and /or D-Day. Germany’s finest hour came after the second world war, and continued, with the “economic miracle” of 1950 – 1960, and then the success of the EU. There are no reasons why Germany should mark her past and every reason to celebrate her future. Most Germans know this and live their lives accordingly.

The War of the Weak
The Rise of Sterling: For good or ill?