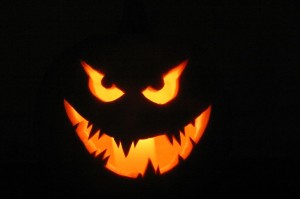 For many of us the night of Friday October 31st will be spent in front of the TV hoping we will not be called to the door on a freezing night and invited to provide a “treat” for a bunch of teenagers.

“Halloween”, “All Hallows Eve” or “All Souls Night”, has been celebrated since the spread of Christianity into the Celtic and Pagan lands of Northern and Western Europe. But its roots go back a lot further than the establishment of the early church. Hallows Eve was a Celtic celebration at the end of the summer at the gathering in of the harvest and when the life-giving properties of the sun were giving way to “the dark powers” of the cold winter – a time of mystery and fear for primitive communities.

As ancient communities embraced Christianity, they remained loyal to their traditional folk culture. The early church went along with this in order to encourage conversion, particularly as pagan belief about the afterlife and the power of the dead fitted easily into Christian ritual and worship.

In common with all pre-Christian religions, pagan religion used ceremonies to protect themselves against the powers of the dead, and to ward off evil spirits associated with the dying of the sun and the coming of the long darkness. The Celts left a portion of the harvest out on the night of the 31st, together with food offerings to protect the heart and home. They lit fires, the better to confound witches and goblins, using the sacred ash and soot to smear their faces – partly so that the walking dead would not identify the living, but also to frighten them away. Jack O’Lanterns made from turnips or pumpkins, had their scooped-out interior lit by a wax candle and were thought to prevent evil spirits from crossing the threshold. At this time of year, especially on Halloween, games were played that were devised to predict the future, including things such as who would die and, more lightly, who would make a good match for marriage.

Semblances of these practices survived throughout the Christian era. Protestants considered Halloween a “Papist ritual” and simply a licence to get drunk, but the church in general had no difficulty in celebrating the passing of the dead whilst they waited in Purgatory on their final journey to either Heaven or Hell (Hence, All Souls Day). Pagan belief was simply reinterpreted to fit Christian practice and belief.

Whilst their parents slump in front of the TV to watch a horror film, children will be knocking on doors, some in fancy dress pretending to frighten the household – in pale imitation of their pagan ancestors of the dark forests and onset of winter.

Demise of the Supermarket
In Defence of “Town Halls”