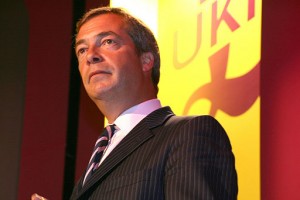 UKIP’s Nigel Farage may be one of the few feeling good at the moment.

Over the past 25 years, governments have attempted to make the UK labour market more flexible in order to control wage costs and encourage labour mobility. To this end, trade unions have been marginalised, the size of the public sector reduced, employment protection eroded, and industries privatised. It is a heady brew of contentious politics and economic necessity.

As the economy recovers, there are still well over a million workers on zero-hour contracts, whilst wages have failed to keep up with prices in areas such as housing, rents and mortgage re-payments. Job insecurity, coupled with extended working hours, has meant that millions of workers still experience poverty, thus failing to register any “feel good factor” in their daily lives. This malaise is proving damaging to the traditional political parties, with the rise of protest groups such as UKIP and the BNP, particularly in the “working class” areas like the North East of England, but also in Kent and Sussex, despite the fact the unemployment rate in Britain is around 50% less than most fellow European economies.

In a recent statement, the Liberal Democrat Secretary of State for Business, Vince Cable, has mused that the British Labour market is now far too flexible. Serious issues are beginning to arise. Tax payers actually subsidise the low pay that flexibility has created via the benefits system and the payment of tax credits, which are both a huge drain on government revenue.

The share of national income accruing to wages has fallen over recent years, producing weak demand and increased household debt. Over the past 5 years real wages have fallen by about 8%, creating a fall in Mr and Mrs Average’s living standards. Furthermore, the surfeit of cheap labour discourages investment and savings. There is little incentive for firms to invest, using borrowed capital, if they know that there is a pool of cheap labour which can be made redundant should there be another economic downturn in the future. Added to which interest rates are likely to rise over the next 3 – 5 years. The young cannot save for a decent pension, and this creates a massive social problem for the future. It is hardly surprising that neither workers nor business owners are excessively cheerful.

Although employment is very low, the economy is characterised by excessive debt, low investment and low productivity – again no comfort to Mr Average.

Optimists might argue that a full labour market may revive the power of labour to bargain up and even restore full-time employment contracts. At which point, on looking up, one may see a squadron of pigs traversing the sky.

It is, of course, entirely possible (indeed, a betting certainty) that a pre-election budget will offer lots of short-term goodies. But with such wide-spread cynicism towards politicians, will this be enough to put a smile on the faces of Mr and Mrs Average?