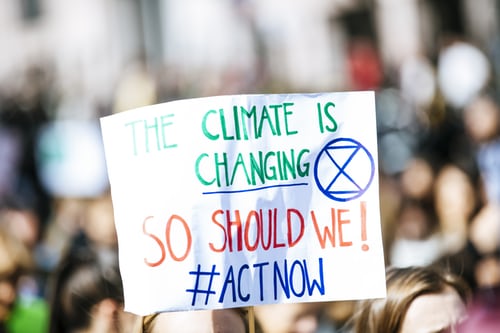 Anthology for a Planet in Peril: Young and Old Tackle Climate Change Through Poetry

Fly on the Wall Press has teamed up with WWF, The Climate Coalition, Dr Michelle Cain (Oxford University), former Derbyshire Poet Laureate Helen Mort, and wildlife photographer Emily Gellard, to create an anthology for our future: Anthology Planet in Peril.

It’s true that there have already been a few anthologies themed around climate change. However, none have presented the scientific research behind each poem alongside it, as this anthology does. Doing so means that the works engage both intellect and imagination. Not only this, but the poems are followed by photography and artwork, making for a veritable cross-disciplinary collage. The book showcases a dazzling array of wildlife photography alongside the hard-hitting facts.

Many of the contributors work within climate change research, covering Australia, Hawaii, the US, Canada, Brazil, UK, Spain and India, with one notable contributor being Bill Mckibben, founder of 350.org and environmentalist writer for the Guardian.

The anthology is highly educational, seeking to engage readers as young as eight years old, and is now set to tour schools and create a forum to empower young people to speak out against climate change.

Following in the footsteps of Greta Thunberg, the Swedish teenage environmental activist who inspired students across the globe to take part in school strikes, the concern among young people for climate change is fiercely on the rise. By December 2018, more than 20,000 students had held strikes in at least 270 cities, whilst the school strikes for climate on September 20 and 27 this year were attended by over 4 million people, according to one of the co-organisers. This new anthology, Planet in Peril, hopes to cultivate these concerns still further.

Following the anthology’s launch in Autumn 2019, Fly on the Wall Press is reaching out to primary and secondary age children through workshops designed to engage them in poetry writing and art inspired by the book and its themes. If you would like to book a workshop for your school, please email isabellekenyon@hotmail.co.uk.

The book is now available for purchase here.

Bouncing Back from Disappointment and Criticism
The Day of the Dead: The Spanish Halloween