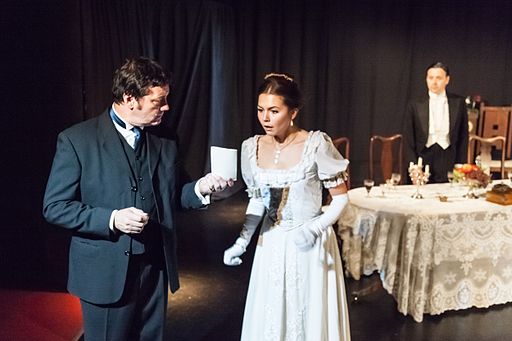 When I was fourteen years old I went to see the Royal National Theatre’s production of J.B Priestley’s An Inspector Calls at the Garrick Theatre in London’s west end. It was a school trip, and many of my friends had read the play in their English lessons, but my class had covered a different play. However, my lack of preconceptions served only to enhance my appreciation of the play’s mysterious, atmospheric tone and twisting narrative. Suffice to say, I thoroughly enjoyed the show and my memory of that production remains vivid twenty years later.

It was only very recently that I rediscovered An Inspector Calls. Firstly, as a result of the recent BBC adaptation, in which David Thewlis portrayed the titular inspector, and secondly as a consequence of its inclusion as a set text in our new English Literature GCSE and IGCSE syllabuses. I felt the BBC did a fine job in adapting the play to television, and though it lacked the urgency of live theatre, and the shock value of the various revelations was diminished through familiarity, it struck me how relevant the story still is. After studying the text in greater depth it now occurs to me how much of the subtext had gone over my head in my first and second readings.

Written and first performed at the very end of the second world war in 1945, and set in 1912, two years before the first world war, An Inspector Calls deconstructs a chain of seemingly unconnected events that lead ultimately and inexorably to tragedy. Though the influence of both world wars is evident from Priestley’s focus on the key themes of time, cause and effect, and social responsibility, I think the beauty of his play is the timelessness of the story, and the pureness of its overriding message, which essentially invites us to review the way we treat others and consider the repercussions of our actions.

When studying English Literature, we are often reminded by teachers and examiners how important it is to consider historical context when composing essays about a writer’s use of form, structure, and language. Yet it could be argued that the best literature not only perfectly evokes but also transcends the time in which it is written. Likewise, An Inspector Calls is an ideal play to study in depth as part of an IGCSE or GCSE course because it not only provides a highly accessible narrative for the first time viewer but also offers rich rewards to the diligent reader.

How to Prepare for the new Academic Year
Which Olympics?