Also in the News: Apprenticeships 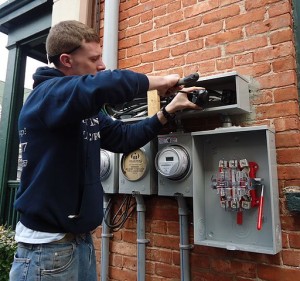 The government and others are looking at apprenticeships. They have a long, honourable and occasionally chequered history. What are they? Classically they are a form of training for entry to a job or a profession, often a skilled trade or regulated profession. They’ve been around for centuries but they’ve ‘morphed’ many times, especially recently. In many ways apprenticeships are a natural and obvious aspect of our education and training system. In fact, to me, with a background in teaching, they’re almost big and important enough to be a parallel post-16 system.

There was a government report on them last autumn because more apprenticeships have been promised. And they’re important enough for two universities and a major research institution to be looking at them. This is also partly because wider changes which form the background are about to take place; full time education will continue to the age of 18 by 2015. So it would make sense to create a completely successful, all encompassing education and training system which completes a young person’s education and prepares them for work. And to provide adults with different work experiences and training opportunities.

Apprenticeships are also now increasingly linked with social policy and welfare reform whereas before they were influenced mainly by industrial and education policy. In fact, if they lead to fuller employment or preparation for it and contribute to economic growth, isn’t that a good thing? Well, it is if it’s done well.

There are many good things about apprenticeships. By involving adults they provide a kind of lifelong learning system. They represent a lot of industries and provide opportunities at different levels. Employers are involved. What, then, seems to be the problem?

The research says more 16-18 year olds need to get involved. Too many lower level courses are offered and not enough at the higher levels. In this respect the system is underdeveloped. So the opportunity for progression that is the ability to move up the scale to higher level courses or into jobs are currently limited. Then, given that 85% of the British economy now consists of service industries, the question arises: how should we best prepare for this? Is the old industrial model the right one now? Then there is the nagging, very British question of status. There remains very little prospect of apprentices going to university as a result of these schemes. Add to this the argument that increasingly the economy is based on part-time, flexible or temporary contracts and the next question arises, about what sort of career can an apprenticeship prepare you for anyway? And finally, are the work-based learning, careers guidance and educational components too complex to manage well? Even Germany, often seen as the powerhouse of work preparation, is having to think about all this. Economists are telling us we should all be thinking about the future of work. But are these old solutions to a new problem? What do you think?

Emotional Intelligence, Vulnerability and the Brain: Part 2
The School We’d Like