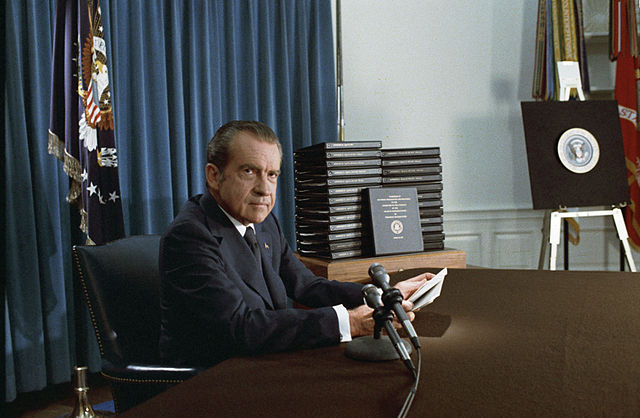 The recent American election was preceded by one of the most bitter, divisive and some would say, corrupt races for office in the nation’s history. Hillary Clinton was accused of numerous bureaucratic transgressions, whilst victor Donald Trump was Teflon-coated to a series of incidents that would have ended most political careers. But this grim episode in American political history, whilst arguably more unpalatable and shameful, will not hold the same historical infamy as the scandal that brought the demise, on 9th August 1974, of President Richard Nixon: Watergate.

The term Watergate has come to encompass a collection of illegal activities undertaken by members of the Nixon presidential administration team. Often referred to as ‘dirty trick’ campaigns, these activities included bugging the offices of political opponents, the harassment of activist groups and political figures, and using the FBI (Federal Bureau of Investigation), the CIA (Central Intelligence Agency), and the IRS (Internal Revenue Service).

The scandal was known as Watergate because, in June 1972, a break-in occurred within the Watergate office complex. Five burglars entered the Democratic National Committee offices and were discovered by 24-year-old night watchman Frank Wills. They were arrested by police, and it was revealed that the burglars were employed by Nixon. However, in August of 1972, President Nixon told reporters, “no one in the White House staff, no one in this administration, presently employed, was involved in this very bizarre incident.”

The arrest of the Watergate burglars was just the beginning of a long chain of events through which it became increasingly clear that President Nixon was deeply involved in an extensive cover-up of the break-in, and in other White House secretly sanctioned illegal activities.

The earliest of these underhand activities is believed to have occurred in 1970, when The New York Times revealed a secret bombing campaign against neutral Cambodia in Southeast Asia was being conducted as part of the American war effort in Vietnam. Following the revelations, Nixon ordered wiretaps of reporters and government employees to discover the source of the news leaks.

By 1971, Nixon was so worried about the number of leaks from the White House undermining his position that he established a “Plumbers” unit in the White House, with the sole purpose of gathering political intelligence on perceived enemies and preventing further news leaks.

In July 1973, evidence mounted against the President’s staff, including testimony provided by former staff members in an investigation conducted by the Senate Watergate Committee. The investigation revealed that President Nixon had a secret tape-recording system in his offices to record conversations between his colleagues.

After a year-long battle, the US Supreme Court ruled that Nixon had to release the tapes to government investigators. These audio recordings revealed that the president had indeed attempted to cover up all of the dirty tricks activities that had been taking place, and left him facing impeachment.

Richard Nixon resigned from the presidency of the USA in shame on August 9th, 1974.

In Point of Fact
Opinion: Hail to the Chief