The Horrible History of Guy Fawkes 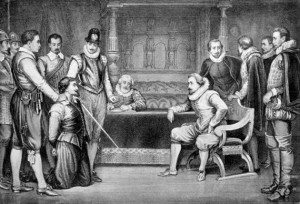 In 1605 a man called Guido (Guy) Fawkes, along with Robert Catesby, John Wright, Thomas Percy and Thomas Winter, plotted to blow up the Houses of Parliament.

In 1603 Elizabeth I died and the English Crown had gone to the Scottish King James VI. He had been the King of Scotland for 36 years when he also became James 1 of England. The country he inherited was deeply divided by religion. Although he was Protestant, James managed to make enemies of both Protestants and Catholics.

Much of the country’s continued disharmony was due to James’ belief in “the divine right of kings” which meant he thought himself to have been appointed by God, and therefore answerable only to God, and not to Parliament.

Only two years after James was crowned King of England, a plot to kill him was devised – ‘The Gunpowder Plot’.

The Catholic plotters rented a house next to the Houses of Parliament. They planned to dig a tunnel from the cellar to the House of Lords and pile up barrels of gunpowder to ignite when the King and all the Members of Parliament were assembled for the opening of Parliament on February 7th, 1605.

Things did not go to plan for the plotters, however. Digging was slow, and by December 1604 the House of Lords had still not been reached. So Fawkes rented a cellar directly below the House of Lords and stacked more barrels of gunpowder there, only for the opening of Parliament to be postponed again, this time to November 5th.

It was while waiting for the opening ceremony that plotter Francis Tresham made a fatal mistake. He wrote to his brother-in-law, Lord Mounteagle, warning him not to be at the opening.  Lord Mounteagle, however, was on the King’s side, and shortly after receiving the letter he sent soldiers, who found Guy Fawkes alone in the cellar setting a slow-burning fuse.

King James himself questioned Fawkes. Guy admitted to plotting to blow up the Houses of Parliament, but refused to give the names of the other conspirators. Eventually, however, the house where they were hiding was discovered. Catesby was killed and the others taken prisoner. Some were hanged on January 30th 1606, and Fawkes was hanged on the 31st. Only Francis Tresham was spared. He was sent to the Tower of London, but died shortly afterwards.

Today we remember Fawkes and his colleague’s failure every year on 5th November, by burning effigies of Guy on large bonfires.

Halloween – An Ancient Tradition
English Literature A2: Love in Elizabethan and Jacobean Literature