The Origins of Football: The Game That Couldn’t Be Banned 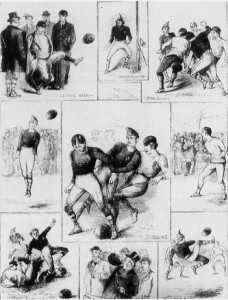 Football has its earliest roots in Ancient Greek. Known as cuju (which means kick-ball), the game was played by the military as a form of exercise. Its first mention appears in a military manual from the third and second centuries BC.

It wasn’t only the Ancient Greeks who used cuju in this way. Documentary evidence of a similar nature can be found in the Zhan Guo Ce, a Chinese military manual from the 3rd century BC, which involved kicking a leather ball through a small hole in a piece of cloth which was fixed on bamboo canes

To discover the historical origins of the game of football we recognize today however, we need to turn to Medieval England.

Often referred to as ‘Mob-football’, this ball game was played between neighbouring towns and villages, involving an unlimited number of players on two teams. A ball (often an inflated pigs bladder), would be kicked to different local landmarks, such as the church or market place. These games could go on for great lengths of time, and often caused fights to break out. Injuries were commonplace.

An early reference from Ireland in 1308, tells of a spectator at a “football game” being charged with accidentally stabbing a player. In 1321, another document tells of a football game in Norfolk, “during the game at ball as he kicked the ball, a lay friend of his… ran against him and wounded himself.”

Many attempts were made to ban football in the fourteenth century. In 1314, London’s Lord Mayor, Nicholas de Farndone, issued a decree banning it; “f]orasmuch as there is great noise in the city caused by hustling over large foot balls in the fields of the public from which many evils might arise which God forbid: we command and forbid on behalf of the king, on pain of imprisonment, such game to be used in the city in the future.”

King Edward III added his voice to the protests against the game in 1363 when he issued a proclamation banning “…handball, football, or hockey… or other such idle games.”

These attempts to end football failed, and so in 1409, King Henry IV tried a different tactic to curb its popularity, by passing a law preventing people from making money out of “foteball”

It is at the end of the Fifteenth century that the first historical reference can be found of football being transferred from the village and towns to a playing field. “[t]he game at which they had met for common recreation is called by some the foot-ball game. It is one in which young men, in country sport, propel a huge ball not by throwing it into the air but by striking it and rolling it along the ground, and that not with their hands but with their feet… kicking in opposite directions…”

By the Tudor period, it was clear that football was here to stay. For in 1526, King Henry VIII himself ordered his very own pair of football boots!