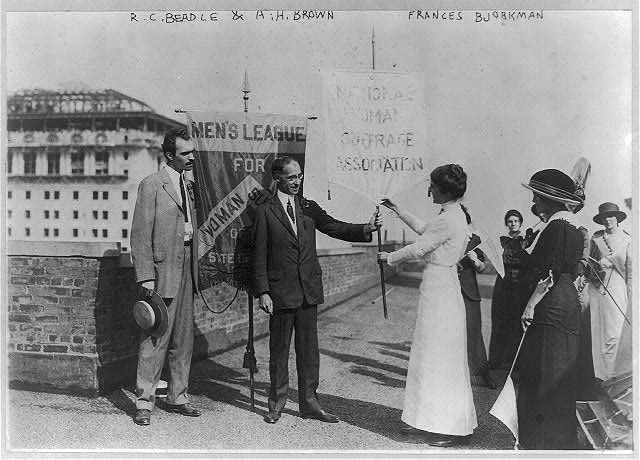 The Men Who Supported Women’s Suffrage

February 2018 brings with it the 100th anniversary of women over the age of 30 being granted the vote alongside men, and we are running several articles on the subject. There is already one piece on one of their chief campaigners, Millicent Garrett Fawcett, on our Oxford Home Schooling blog page  https://www.oxfordhomeschooling.co.uk/blog/millicent-garrett-fawcett-campaign-womens-suffrage/. However, while much has been written about the women who fought for their right to vote, less is known about the men who supported their cause.

The campaign for women’s suffrage began in earnest in 1866 when Millicent’s sister, Elizabeth Garrett and Emily Davies organised the first large scale petition to Parliament asking for women to be given the vote on the same terms as men. Between 1870 and 1880 there was also a growing number of male supporters for the Suffragette movement. MPs and Peers began to support the women by presenting additional petitions calling for an end to suffrage. Between 1867 and 1889, thirteen Bills proposing legislation on the issue were discussed in Parliament- all of these proposals were put forward by men. In 1888, 169 MPs signed a statement urging the Government to provide additional time to discuss a women’s suffrage Bill.

The Reform Acts of 1832, 1867 and 1884 allowed increasingly larger numbers of men to vote. With this rise came more men who wanted women to be able to have their voices heard as well. MPs such as John Stuart Mill, Jacob Bright, Peter McLagan, and Walter McLaren all worked to have women included in the parliamentary process.

In 1907, a group of 42 influential men including Henry Nevinson, Israel Zangwill, Hugh Franklin, Henry Harben, and Gerald Gould, formed the Men’s League for Women’s Suffrage (A banner is exchanged in the picture above). Israel Zangwill declared the group’s support by saying, “The petticoat no longer makes the Suffragette. We are suffragettes – suffragettes in trousers.”

Men who supported women in this way often had to put up with ridicule and many risked their careers. Others risked their liberty. For example, on 28th October 1908, Victor Storr and Thomas Bayard Simmonds got into in the Public Gallery and demanded “justice for the women of England”. While they threw suffrage handbills into the crowds, some of the women in the Ladies Gallery chained themselves to the heavy metal grille that obscured women from the Chamber. Afterwards the Speaker declared that the “decencies of the House (had been) violated.”

These weren’t the only men willing to risk their reputations. Speaking in the House of Commons on May 22nd 1912 the socialist George Lansbury said, “There are working women… No one will want to argue that these women have undertaken this imprisonment, and the torture of forcible feeding merely for the fun of the thing or merely to get notoriety.” On entering the Commons in 1910, Lansbury quickly affirmed his support for women’s suffrage and for women campaigners, however militant their actions. Indeed, 1912 Lansbury went further, resigning his seat and seeking re-election as a women’s suffrage candidate. But while women supported his case, the Labour Party was openly hostile towards him as he began to support suffragette militancy.

Lansbury wasn’t the only hardline supporter of suffrage. Frederick Pethick Lawrence, (he added his wife Emmeline Pethick’s surname to his on marriage in 1901), played an active role in the militant suffragette movement between 1906 and 1912. In an attempt to cut back the rising tired of suffrage ‘crimes’ the Government made an example of Lawrence. He was imprisoned, forcibly fed and later faced bankruptcy.

In 1960, years after all women had finally won the right to vote, the now knighted Lord Pethick-Lawrence declared: “All down history women have supported men in their fight for liberty. They have toiled with them, suffered with them, died with them. There is nothing surprising, therefore, in the fact that in the militant struggle of British women for their own emancipation, some men stood with them in the fight.”

TED Talks of Interest
The Rise of the Audiobook