Mata Hari, “Eye of the Day” 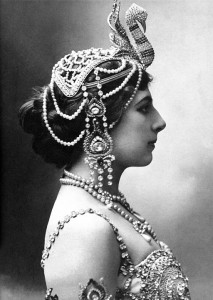 Margaretha Geetruida, stage name Mata Hari, was a citizen of the Netherlands, and was tried and convicted as a German spy on July 24th, 1917, before being executed in France on 15th October. She was by no means your typical spy, if there is such a thing.

The eldest of four children, her father was a prosperous milliner invested in the Dutch oil industry, but by 1889 the family was bankrupt. Margaretha was sent to live with her godfather and trained to be a kindergarten teacher. Unfortunately, her good looks attracted the unhealthy interest of the school’s headmaster and she moved on to her uncle’s house in the Hague.

Desperate to escape the confines of family life, aged 18 she answered an advert in a national newspaper that had been placed by a colonial army captain named Rudolph Macload, who was seeking a wife. Though 20 years her senior, they were married on July 11th, 1895, and moved out to Java. But Macload was an abusive alcoholic who blamed her for his lack of promotion. Further, she then had an affair with another army officer and eventually, in 1903, left her husband to return to the Netherlands. Divorce followed in 1907 as once more she moved, this time to Paris. She took employment as a circus horse rider at the start of what would be an eclectic and controversial career. Indeed, she supplemented her income in the dubious forms of modeling and exotic dancing.

Her flirtation and promiscuity captivated audiences and in 1905 she became the mistress of a prominent French industrialist. She believed she had found a rich protector in a world of male predators and by this time had taken to portraying herself as a Javanese princess of Hindu birth.

By 1912, however, her dancing career was in decline. She was putting on weight and Paris had grown tired of semi-naked belly dancers. Her “rich protector” soon abandoned her and she was left to concentrate on earning money as a courtesan, seeking out high ranking military officers and politicians. With the coming of war in 1914, it was a short step to espionage.

The Netherlands was a neutral country, and so Margaretha was free to travel anywhere in Europe. In 1916, when traveling from Spain to France, her ship docked in Falmouth and she was arrested by British Special Branch and questioned about her male contacts in Spain. On this occasion she was released without charge, but it was a portent of things to come.

The following year the German military attache in Madrid radioed Berlin, describing the “helpful” activities of an agent code-named H-21. The French Suretee identified H-21 as Mata Hari and on February 13th, 1917, she was arrested in Paris, before being tried on July 24th, accused of spying for the enemy. Her defence lawyer was denied the right to cross examine witnesses. The detail and quality of the information passed to Germany was never fully evaluated, nor was the possible collusion of the French and German intelligence services leading to her arrest. The verdict of the court was therefore a foregone conclusion. She was executed by firing squad on 15th October, aged 41. A sad footnote to her death was that her body was never claimed by friends or family, and was instead passed on for use in the study of medical science.

Hamas and the Tragedy of the Palestinian People
August 1916: The Tactics and Technology that extended World War One