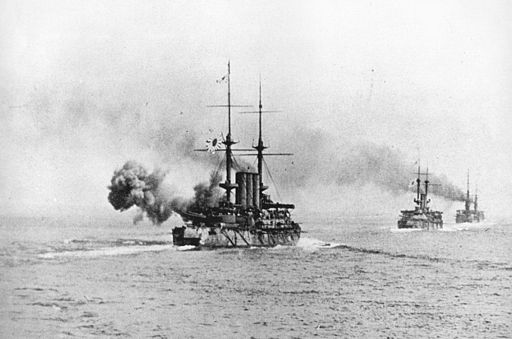 For the first time in over a century, a Russian battle fleet has sailed west, through the North Sea and into the English Channel, en route for the Eastern coasts of the Mediterranean and striking distance of besieged Aleppo. It has been in the eyes of most a calculated act of contempt by President Putin for Britain, the EU and American foreign policy in the Middle East. And they have been entirely untouchable. The story of the last time Russia took this path is, however, rather different.

In 1905, another Russian fleet, The Baltic, sailed the same way, bound for the far east. The Russo – Japanese war had broken out the previous year, and Russia wished to protect its interests in Korea, Manchuria and China. With the bulk of the Russian army stationed back in the west of Russia and solely reliant on the limited capacity of the Trans-Siberian Railway to reach their battle stations at Port Arthur, situated on the northern coast of the Yellow Sea and only accessible via the Chinese city of Mukden. The fleet was to be a crucial first reinforcement for the beleaguered troops there.

Tsar Nicholas II chose Admiral Zinovy Rozhasvensky to command the fleet, and perhaps this was the first mistake of the many that were to afflict the fleet. Rozhasvensky was unpopular with his officers, with a morose and distant character occasionally prone to outbursts of violent temper. Most of all, though, was also to prove unlucky. Making matters even more precarious for his fleet was the simple fact that his crews were untrained in all aspects of seamanship. To complete this template for disaster, the Russian battle tactics were obsolete and morale was predictably low.

The Russian navy believed rumours that Japanese torpedo boats and submarines were patrolling the North Sea. This would lead to the first disaster of the voyage. In dense fog, a small fleet of English fishing boats were mistaken for Japanese raiders and fired upon. Two were sunk outright before Rozhasvensky was able to stop the action. Britain was suitably outraged and threatened war.

Misfortune and incompetence continued to dog the fleet as it progressed slowly on into the Mediterranean. After Refuelling at Vigo in Spain, the flagship Kamchatka lost contact with the fleet for several days, having fired on German, French and Swedish vessels. On reaching Tangiers, another ship accidentally cut underwater cables, severing communications with Europe. Prevented from using the Suez canal, controlled by an angry Britain and France, the fleet was forced into a long detour around the Horn of Africa in order to finally reach Port Arthur.

An international enquiry exonerated Rozhasvensky from blame for the loss of life for the attack on the English fishing boats, with £66,000 compensation paid to the families of those who had died. On a larger scale, the Tsar was left humiliated.

In a final debacle, the Russian fleet was annihilated by a vastly superior Japanese fleet at the battle of the Tsuchima Straits later in 1905. And despite his exoneration, Razhasvensky took the taint of disgrace with him into the life of a recluse. Two years later he died.

Whilst such military folly could hardly be associated with any serious force today, the astonishing lack of preparation and suitability of personnel for such a wartime enterprise makes it a curious footnote in naval military history. Though one Russia would perhaps rather forget.

The National Citizenship Scheme
In Point of Fact