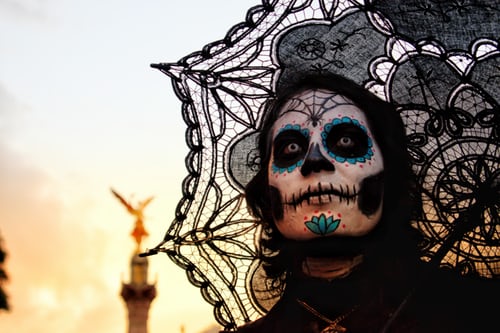 The Day of the Dead: The Spanish Halloween

One of the fascinating things about raising home educated children outside our native UK is discovering that the customs and celebrations we’ve grown up with are often celebrated quite differently abroad. For instance, here in Spain, while Trick or Treating is slowly becoming a more recognised Halloween treat, The Day of the Dead celebrations remain by far and away the big event. Despite its morbid name, it is very much a celebration, when adults and children alike remember and celebrate family members who have died. American and British cultures have a fear of the dead, and our Halloween traditions are based on ways to protect from evil spirits. Spanish traditions, on the other hand, are quite different.

The Day of the Dead is the last of three days of fiesta in many Spanish speaking countries, although in Spain the last two are often combined into one. It all kicks off on our “Halloween”, known in Spain as the Day of the Witches (Dia de las Brujas). Depending on where you are in Spain, this will be celebrated differently. You might see people dressing up as ghosts, ghouls or zombies, dancing around bonfires with special alcoholic cocktails made inside carved-out pumpkins! Many towns and villages will put an extraordinary amount of effort into decorating them, and have street traders and children’s entertainment well into the early hours of the morning.

Originally, the 1st of November was known as All Saints Day (Dia de Todos los Santos) and the 2nd November the Day of the Dead (Dia de Muertos). In Spain these are now combined into one day, and it’s one of the most important days in the Spanish calendar. Shops, schools and businesses are closed so that families can come together and spend time with each other. In Catalonia, celebrations produce roasted chestnuts, sweet wine, roasted vegetables and a local speciality cake. One small village, Sant Feliu Sasserra, has a two day festival remembering the women who were put to death during the Spanish Inquisition, due to accusations of witchcraft. Many towns have open-air entertainment, stalls and games, and welcome visitors to be part of their joyful celebration of life.

Despite its name, the Day of the Dead is a celebration of life, and life that has come before. Families will grieve together as well as remember the wonderful times they had with relatives and friends who passed in previous times. Graves will be visited, colourful flowers, gifts and brightly painted sugar skulls will be laid. In total, about a fifth of the florists’ annual sales will be attributed to this one day. Visitors to the country will need to drive slowly past graveyards as streams of people are likely to be walking to visit those who reside there. At home, many Spanish people will create an altar to their dead and decorate it with bright flowers.

Spain is a country that really values its families and fiestas. The Day of the Dead is probably the single most important day in the Spanish calendar. And accordingly, in true Spanish style, it is celebrated with heart and soul.

Anthology for a Planet in Peril: Young and Old Tackle Climate Change Through Poetry
3 Ways to Create More Time