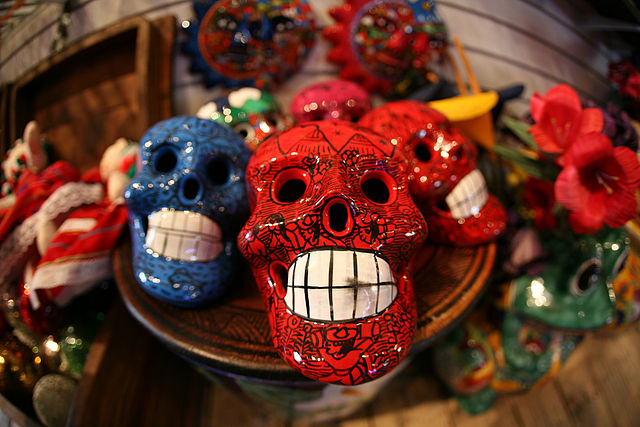 Spanish Halloween: Witches, Saints and The Day of the Dead

While kids will not go short of sweets in Spain around what the UK and USA call “Halloween”, there’s less of the “Trick or Treating”, and more of a huge fiesta which the entire country of Spain celebrates together.

The festival begins on the 31st October with “Dia de las Brujas” (Day of the Witches). Different regions of Spain celebrate this in different ways. For instance, on the South Coast in Malaga, locals dress up as zombies and parade through the city, whereas in Galacia, in the North West of Spain, there is pumpkin carving, parties around bonfires (more similar to the UK’s Bonfire Night) and a special alcoholic drink is created called the quemada. Sometimes this is made inside a pumpkin and a spell is cast before it is drunk!

The 1st of November is one of the most important dates on the Spanish calendar. Known as “Dia de Todos los Santos” (Literally, Day of all the Saints, or All Saints’ Day), it is when Spanish people celebrate the Virgin Mary and all of the Catholic Saints. It has been combined with the “Dia de Muertos” (Day of the Dead) often celebrated on the 2nd November in other Spanish Speaking countries. On this day the Spanish also remember the lives of their deceased relatives and friends. They very often visit their graves and lay flowers, and amazingly, the Dia de Todos los Santos brings about 20% of the year’s sales to the Spanish florists! Remembering and honouring their dead relatives is truly a family affair, with business, shops and schools closing down to ensure that families can be together to remember and mourn their loved ones, as well as celebrate their lives and remember happy times together.

Another Spanish All Saints’ Day tradition is seeing the play “Don Juan Tenorio” (link: https://en.wikipedia.org/wiki/Don_Juan_Tenorio). This is the story of a man called Don Juan, who made a bet with a friend over which of them could do the most harm to other people in one year. As part of the bet he had to try to make two women fall in love with him – one a nun, and the other a woman who is engaged to another man – leading Don Juan down a path where he has to decide whether he is truly an evil man or a good man, and in the end, to choose his ultimate fate: Heaven or Hell?

While British children are enjoying the fruits of their Trick or Treating the night before, Spanish children (and their parents) have their own special cakes and sweets which are traditional to All Saints’ Day. Again, different regions may have different specialities but most areas are likely to have the oddly named “Huesos de Santo” (Holy Bones) – don’t worry, there’s no actual bones involved, holy or otherwise! In fact, they’re tubes of rolled up marzipan, filled with a variety of delicious options such as chocolate, jam or fruit. (link: http://www.bookingforstudents.com/traditional-sweet-of-spanish-dia-de-todos-los-santos/)

All Saints’ Day is rounded off in many places by afternoon and evening street fiestas, often including some wild and wonderful costumes, processions of floats throwing sweets to the children, and street markets. One of the most important Spanish days of the year, it emphasises the particular importance to Spanish culture of family togetherness; adults and children each remembering, mourning and celebrating side by side.